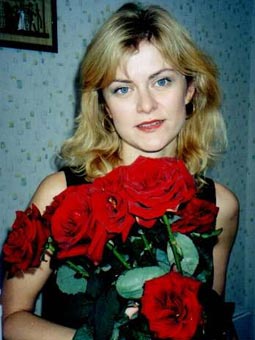 REPORT N1
Ben (USA)
I want to report this woman. Her name is Inna Adamova. Her email address is star@infonet.by and her address is Kirova 3-71, Minsk, Belarus 220050. Her letters were the "I need money for internet scam". When I called her on it her email back was riveting with obscenities and how ****** I was and how she only wanted my money and that it was just "business". But I am certain that it was her anger that caused her to write back within thirty minutes. When I informed her that I learned of this site and that I would do what I could to protect others from her by forwarding address information and pictures, she reacted. She actually should have been at the children's hospital doing her very "noble" work as a doctor according to her timetable. Anyway, nearly burned but saved your information. Thanks. Here are some photos and her responding letter after I confronted her with the truth, if interested.
REPORT N2
Andrew (USA)
Unfortunately I have read all the signs of a scammer too late and all the elements of a scammer were present.
Whilst poetically professing undying love - Ina already asked for $265 in her second letter so that she could obtain a visa and come and visit me. I responded and said that I would not be able to see her just yet as I have a lot of activities going on. I offered to go and see her in June of this year. She responded as poetic as ever and avoided answering simple but direct questions about her family and city. At the same time she pleaded that she was having difficulty to pay her bills and her internet bill. She stated that her salary as a doctor was very small.
In retrospect I find it uncanny that she has the luxury of a home based PC and internet in comparison to many Russian girls who don't. In addition she has the luxury of a home telephone and lives on her own which means she carries all her own bills. In her pictures I notice that her home furnishing and curtaining does not look cheap. Her clothing in her photos does not look cheap either.
I felt sorry for her and thought that she had been sweet in her letters (love is blind) so I sent her $100. When no response and thank you were forthcoming I got suspicious. I phoned her and asked her why she had not e-mailed (she did say on the phone the previous night that she would). She said that she did not have time - but not in her usual sweet tone. I asked her directly if she was a scammer to which she responded with "F*** You" and slammed the phone down.
REPORT N3
Claus (Germany)
Hello,
I wrote your information about this woman. Thank you very much. You helped me not to make a mistake.
I found this woman in the internet and had e-mail contact.
She has a new adress: w972b@yahoo.com
....and here is the latest letter
So you can warn other men with this new e-mail adress not to do a mistake.
Yours
REPORT N4
Ottmar (Germany)
I met Ina Adamova about three months ago. At first she sent me mails which I answered again and again and which got more and more loving with time. I envited her to come to Germany and she was completely enthusiastic and informed me that what will cost the visa would her find out at once. She informed me that the visa and the insurance will cost $ 175.
As a simple pediatrician, she informed me so she cannot afford the amount, what I absolutely understood. I considered this amount acceptable and referred her euros on January 14th, 2002. This was the last day I heard of Mrs Adamova of it, too. I have sent her two e-mails since then and she hasn't answered either. I sent a third and it came back as undeliverable. I only found out now through the internet that I have been scammed. I will today write to the Belorussian embassy in Berlin and contact Interpol as well as FBI. My great efforts are only to see Ina Adamova in front of court and hope that I create this. My money which I have sent to Mrs Adamova isn't aching. It only hurts to have been deceived in such a disgraceful way. I only can hope that the Belorussian government as well as all states of former USSR concerned get a grip on it and cooperate here with all states.
PS: II followed all means and ways to get my money again. Addressed the Department of the Interior in Minsk (Mr Oskar Parmon). This wasn't unsuccessful. Mrs Asamova sent the whole money to me back to escape a punishment by the court.

Emails from Inna Adamova to Ben (USA)
I knew from the beginning that you are an idiot... Did you really believe that such **** old man like you could take my attention????? Not for everything in the World. I only needed money from you. It is called" business". If you ever send me any e-mails , be sure I will never read even one word of that " bull****", as I have never read no one of your ****** letters - be sure. I would advise you to find for yourself woman 45-46 years old, *** and **** like you are, may be she will agree to have f*** with you, but I am not sure that you are able to do anything in bed, if you are writing all these ****** letters. Anyway you will find yourself in the crazy house quite soon. Very funny. Look at the mirror sometimes, and then, go and f*** yourself.

Thank you for your lovely warm invitation to visit you I would love to !

But I know it is not easy to open Visa for pretty single Russian girl.

The only way is reply for the help in the Tourist Agency, they will make all the nesse sary papers and apply for Visa for me, but I found out that it will cost me 175 USD, which is terribly expensive.

But, not difficul and take 1 week time.

The airport is only one in Minsk, but the flight every day, by the way, what airport do I have to fly? May be it would be better for us to meet in Warsaw for weekend ? - If you buy me the ticket and reserve the hotel, I do not need Visa for Warsaw.

Good close family with special man for me , raising beautiful children in a cozy romantic family atmosfere, enjoying life when is pass - that is the only my dream , and the only thing I pray for.

Well, Darling, I have to finish now, tomorrow is my sisters birthday, and I am going to buy one very beautiful flower I saw in the shop yesterday now, just hope it had not gone yet.

Have a very nice evening.
Your. Ina