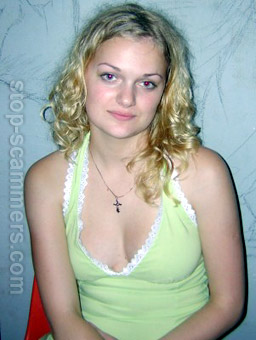 REPORT N1 (added on February, 5, 2007)
James (USA)
I met her on my email one day about six months ago. she has ask for a little over $1600.00 for airfare. and keeps pushing for it. i googled her email and it came up as a scammer. i told her but she saids people lie about her. and tells me now after i found her on hornymatches. that she speaks with other people because she can feel that i am doing it also. this after i caught her. it's not the first site i found her on i found her on another earlier and she denied it was her so i told them what she said and she was kick off. it had her pic but she told me she lived in chebksary but on the profie it said kazan. and said i was the only one she sent that pic to but i know i did'nt do it and there it was. i am doing this so she can't hurt anyone else. i did'nt send any money i had a feeling it was a scam, and even ask me to send money to some guy named kazakov pavel saying he is a travel agent but i think this is her ****.

Emails from Elena Nosova to James (USA)
hi my love Jim!!!!!!!!!!!!
I am glad to receive from you the letter!!!!
I VERY STRONGLY LOVE YOU!!!!!!!!! My love I very strongly miss on on you!!!! Honey I today was in agency travel and have told that I shall soon give a payment for documents and the ticket!!! To me there have told that is dangerous to receive hour of money, that hour can plunder me at leave bank because the sum big. To me have advised to use the agent of this agency. Honey very I am afraid. To me have told that there were moments that even killed girls because of money. Honey, me have convinced to use this agent. The agent call Kazakov Pavel.
honey, I very strongly love you. I do not want to risk, we very for a long time went our meeting!!! And I want to see you very strongly!!! Let the agent will receive money and will solve a problem with documents and the ticket. I very am strongly glad that I am fast can to embrace you!!!!!!
I very strongly miss on you!!! Honey I very wait from you for the answer, I VERY VERY STRONGLY LOVE YOU!!!!!!!!!!!! YOURS ELENA