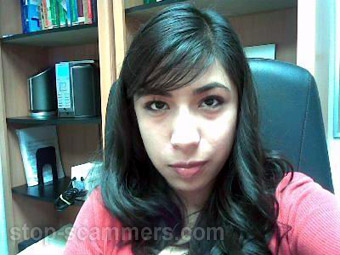 REPORT N1 (added on February, 13, 2007)
Rune (Norway)
Chatted with a "women" who contacted me on friendster, understood right away that she was a he, and a Nigerian scammer, but played along with "her" and got all information on who's realy behind the photos and scamming. Typical Nigerian scammer!
Think everyone believes a story about beeing a nurse and beeing sendt to Nigeria, and want to go home, but need money for plane ticket.
Fall in love instant, and want to come and spend her life with you!
Believe to have gotten the name and maybe his friends name, when I played them a little (read the chatte).
Used very long time to send some photos who was of another women then the one she used on friendster, look at the ****** excuse she have when I ask about it!
Realy funny to se how quickly they have the second name and other information ready, when I refuce to send to the first one, and how eager they get when I play along and tell them a founy western union number!
"She" tried to get in contackt with me the next couple of days, when she didn't get any money at the western union office.
Told "her" that I reported her to gouverment sites after some time and she only said I'm not a scammer yet and bye.
Created: 2007-02-13    Last updated: 2007-02-13    Views: 1267