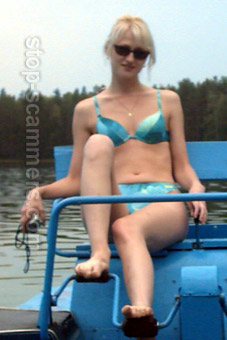 REPORT N1 (added on March, 13, 2007)
Malcolm (New Zealand)
I was first contacted on my nom-de-plume by this young lady in December last year. I soon figured she was a scammer, and led her along for bit before dropping her last month.
She wanted $1600 for her ticket to visit me. I offered to supply her all neccessary tickets from this end, but she was still only interested in the money.

Emails from Daria Patrusheva to Malcolm (New Zealand)
Hello Phil This is great to find a letter from you in my mailbox.
Though I know a little about you now but I feel that you are an interesting man and it will be a great pleasure for me to communicate with you.
I'm wondering what is the time difference between us. E-mail is so good - it delivers messages in seconds.
Many kilometers are between us, on the other hand, we are no longer so far away to each other.
I promised you to write about myself. I was born in Volzhsk - quite large Russian city.
My father is a colonel and he had to travel around all Russia during his military service in past.
My mom told that they had changed a lot of places from the Eastern coast of Russia to the Western borders with Ukraine and Belorussia.
I did not have that opportunity to travel with my family because when I was born my father's service was ending up.
I was six when we moved to Saratov, This was the last move of our family and my father retired.
I went to school in Saratov. In ten years I entered the Pedagogical Institute - an institution where you get high education, like college or university.
But now I again live to Volzhsk.
Then I became an engineer in physics. I had a chance to be a teacher after graduation.
But I went the other way. Teaching is not popular nowadays here.
Teachers are poor. I'm not saying that I'm reach. I can survive being an engineer.
But I decided to go study further as a post-graduate (you call it Master Study).
Read more