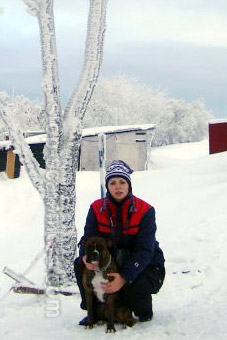 REPORT N1 (added on March, 20, 2007)
Phil (Australia)
She was known as Oceanwave on RSVP, but deleted her profile. She's interested in literature, Pushkin, Britney Spears, Tatu, Scorpions, and so on. She lives with her mum, gave several photos, and apparently doesn't have a phone. She's looking forward to a marriage (of course).
Her profile matches some other scammers', but not sure it's the same.
REPORT N2 (added on September, 19, 2007)
David (USA)
She is posted under this different name on SRW, similar pictures with same dog, claims to live in Volgograd. She wrote three reasonable letters and sent believable pictures.

I am pleased so to receive your answer again! The my dear friend, certainly, whether can be you, wants, studying about ours The correspondence, about essence of the correspondence also, really? As I want to inform, that I have decided to get acquainted through the Internet, due of my girlfriend Kristina which one one year ago to get acquainted with the man from Germany and his name is Huns, I have told to you about it earlier. Phil, probably, it is possible, we shall be together during future time, we can be, I would like to look a marriage also if you will want it, me do not want to hide it so the important fact, but we should to study a The party of things about the friend the friend more and more, it will be Reasonable and it is correct, valid, Phil? I hope, that you agree I with this fact also. Please, inform me about it, well? But in mine Opinion, again and again, we should study about the friend to the friend More and more, I repeat it! Please, agree with me, Phil! Mine The dear friend Phil, I would like to inform you about my family. I Want to speak you, that I have not the big family. It - my mum Elena, On a speciality my mum - the seller in shop, we have good Understanding between us. As, I think, that ours Parents have trained us good formation. I think, that it is so good, and I are so proud, that I have my mum. Also I want to speak you, that I live with my family in various apartments, because I during long ti
Read more