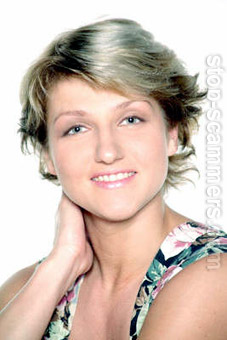 REPORT N1 (added on March, 21, 2007)
Patrick (USA)
Well time to expose another woman of deceit, this is the case of Evlyn Collin. I received a note from blackmatch saying that I had a letter from her...in it she said, simply, that she saw my profile and just wanted to know me better.....so I pulled up her profile and saw first thing that she lived in Albany, New York. I had already been made a fool of a few times already and I had made up my mind not to even fool with anyone that was from overseas.....I said, N.Y thats not too bad...not too far...besides she was a nice slim goodie....I returned her mail and got an instant reply asking me to meet her on Yahoo chat. We talked for about 4hrs straight and in that time she turned the heat up and fell madly and passionately in love with me. She strongly and constantly professed her strong relationship with God..her supreme being...
After a few hours break in chatting ..she sent about 2 notes and a long letter..I replyed and as I was doing so, she popped back online to chat...I asked her where exactly in N.Y. did she live ...it was at this point that she informed me that she was now in Nigeria visiting her mom.(ooh ooh) and that after being there for two weeks and staying in a 70 dollar a day hotel, that she had ran out of money and decided to give a travel agent her last 900 so at least she would have that much secured for a flight back to the states....this was in Sept. 06...she also stated that she would have to leave the hotel in two days as her week would be up.
Men....those Nigerians have perfected the art of a three way scam...not only is the woman giving you a story...but she seems to have two independant people backing up her story. In this case it was the hotel manager and the travel agent.
She asked me to call the manager and I did...listen to this....he gets on the phone....asks me" do I love her"....do I intend to marry her...I mean he was serious...he said" Mr Patrick...this is a very beautiful woman and all of the rich men around here knows that she is in trouble and have all ask to marry her and take her away.........."Now if you love her and dont want to lose her...."please send the money for the rest of her ticket so she can come to you quickly, for she has to leave this hotel in two days. Gentleman..I am disabled..I am here at the house all day...all night....what else do I have to do but go on these wild adventures on the net.
So, to sum things up...I talked on the phone with the travel agent...sent emails back and forth with the hotel manager...and was sent her flight info by email....I then went directly to the airlines and looked up the flight myself...everything was 100 correct..flight number...times...but they all seem to lack current information and had her flight coming in to the states in a different state than the airlines said it would. this was Sept.
This is now March and she is still there...this time she is in a terrible accicent......well I have had enough of fun with her.....time to expose her she is guilty beyond a resonable doubt.......
Created: 2007-03-21    Last updated: 2007-03-21    Views: 1227