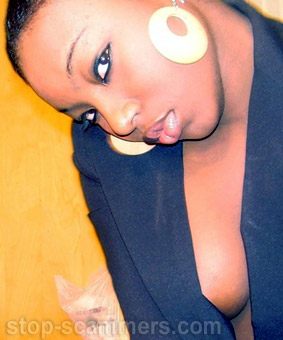 REPORT N1 (added on May, 22, 2007)
Paul (England)
I was contacted by this woman on a site that I never even realised did personal messages. From her very first e-mail she wanted to give me money and I realised immediately that it was not love she was after but a potential target for her greed.

Emails from Shalonda Dabor to Paul (England)
Hello Dearest One,
How are you doing today,i do hope you are fine with the goodness of the day over there,Mine is very difficult because of my orphanage situation,like you know that i am here as a refugee and as a refugee here i dont have the privilladge to do any thing be it money or whatever because it is against the law of this country.
Hence this,I decided to go into fasting and prayer since the day i contacted you because i want to be really moved by the spirit of our god before telling you this secret of mine.well i wish to let you know this is a matter of reality and truth, i have had a strong secret for people since why? because i intend to look for a better and responsible person like you before i will revealed it.
this is not a thing that l have to disclose to anyone that just comes my way,because this is an issue that requires trust and sincerelity,l believe that you may be capable of handling the situation since this is the issue of money which worth the sum of (USD$3.7m)us dollars,l will like you to be aware of the fact that this money was deposited in a private fianance company.
You have to be aware that it was my dead father that made this deposite which worth the sum of (USD$3.7m)US dollars and i was used as the next of kin to the account. prior to this,i have contacted the finance firm and made them aware of my intension to claim the money but only to hear on surprise that my late father have strictly given specific instr
Read more