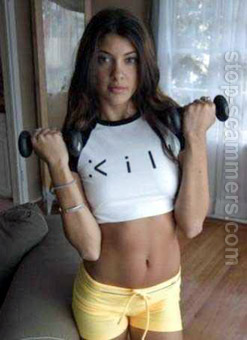 REPORT N1 (added on June, 25, 2007)
John (Canada)
Sent me emails about coming to Canada on work visa, now asks for money.
REPORT N2 (added on March, 14, 2008)
Gabriele (Italy)
She contacted me on onedate, then after a a short chat there, she gave me her hotmail contact, so we stepped in and it begun...
She told me she's swedish and went to Ghana 4 a sort of project, she sdutied to B a nurse and once in Ghana, she got Malaria and finished money, so needed help to get out, she asked only 100 E, and I accepted, like a ******, after it was like in a movie, she gave me the mobile number and she sent me sms everyday, many times per day, we had also *** chat, she is sweet and caring, but she's absolutely a scammer, I found the pics, from perfect paz.com, a young latina model actually... I discovered it today, but sent her some money, asked her 4 proof of ID and always refused, sure...
today she was mad at me cos she was jealous and wanted to close our relationship, after a man called me from her mobile, telling me he's a doctor and she had an accident, so I would have to pay 4 the hospitalization, I asked the docs and bank account, don't post this till I get them plz, I write this now, but I need the data so I can send police there...
REPORT N3 (added on February, 11, 2010)
Jose (USA)
She tooke form mi 3.400

Emails from Julia Shambarova to John (Canada)
Hi my new friend :-)
Im glad to see that you have decided to reply,I see it is very short letter.
It is all right because you are astonished to get my letter.
I want you to know that I have only good intentions and I have not any secrets.
The thing is that I will work in your country for three months or so and I would like to meet a nice man to fall in love or just be closest friends.
I don't want to live in Russia because I have not any chances here, it is hardly possible to explain from first time but I want you to know my plans.
I will work in any shop, bar or restaurant the agency that i am going through will suggest me some locations.
It will be my choice in the end as to what option to go for.
So I will have a simple work till I improve my English. And I can choose any town of your area,agency will only help me to get a visa and all travel documents + some suggested placed to work in.
My best friend last year met the man from the USA when she worked there for three months, too.
She had two jobs. From morning till 4 pm she worked in amusement park and after it she worked as a waitress in some bar till midnight.
She was very tired of course but made very good money there.
It is special programm for young people who wants to work abroad and I think it is the right way for me , I am lost here,and I think that I look pretty enough to find a better place .I want to repeat the same way,it is only my chance to meet a nice man.I want to
Read more