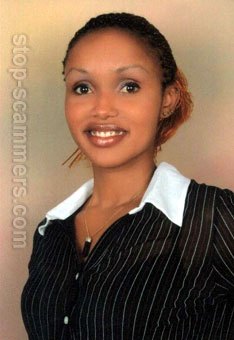 REPORT N1 (added on July, 27, 2007)
Art (Canada)
After receiving many of these letters over the past few months and just deleting them or reporting them as spam I decided to check one out to see what the response was, I am including the first 2 letters..
Her IP address is from Yahoo.ca
vivian_w_mbaki@yahoo.ca
68.142.237.123

Emails from Vivian WIilliam Mbaki to Art (Canada)
DEAREST IN THE LORD,
It is my pleasure to write you after much considerations i can not be able to see you face to face at first. I am 24 years old, I live in a refugee camp in Abidjan, Ivory Coast, West Africa. I am a victim of war, being the first daughter of my father late Chief William Mbaki, from Sierra-Leone.

My father died on November 2006 in a private hospital in Abidjan before his death, he called me on his bed side and told me that he lodge the sum of (USD$9.6,000.000 ) left in a prime bank in Abidjan, Cote D'ivoire with my name as the next of kin, so because of the political problem that cost the death of my father, family members and many people in Sierra Leone, then i decided to seek for a foreign partner who will help me in transferring the money out of Africa for investment purpose under his care since i am a girl also ignorant of investment.

He also explained to me that it was because of his wealth that he was killed by the then government. That I should seek for a foreign partner in a country of my choice as to invest the money wisely.

Sir, with due respect i am seeking your assistance in the following ways:

1. To provide a bank account into which this money would be transferred to.
2. To serve as a guardian of this fund since I am only 24 years
old

3. To make arrangement for me to come over to your country to further my education and to secure a resident permit in your country.

More over, sir i am will
Read more