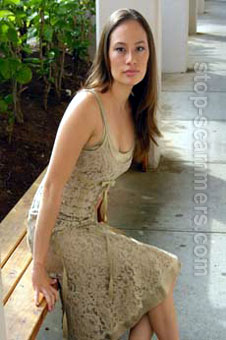 REPORT N1 (added on July, 30, 2007)
Jim (USA)
Sent a flirt at single me, I responded and she sent me an email. From there we went to Yahoo IM and began a dialogue. The second day we chatted, she wanted me to send her uncle some money. I refused and she told me to go to hell.
REPORT N2 (added on August, 10, 2007)
Dennis (USA)
This woman contacted me several weeks ago. She claimed she was born in Poland but was raised by father in Bronx, New York City. Claimed she and her 15 year old son Mickey were visiting her sick mother in Benin.
She said she was flying to Newark Airport, NY and that is as far as her money would take her. I was to provide a ticket from there to me. She claimed her mother was holding her money and would not give it to her unless she received $450.00 for herself. She finally owned up to the fact that she was a scammer. She claimed a Russian man had scammed her out of everything she owned and that was why she was doing this. She wanted me to join her in scamming people but I refused. That is when she threatened to put a hex on me, have me killed, scheme with my sister to kill me and various other threats. I finally just ended the conversation, blocked her address and blocked her from my Messenger. Attached you will find the last two conversations we had. They are more than sufficient proof of her scamming, especially since she admitted to being a scammer.

Romance scam letter(s) from Jessica Jane Wolf to Jim (USA)
Hello,
Thanks for your mail.I would like to tell you everything about me so that you could know that i don't have time playing games.My name is Jessica Jane Wolf but people call me JJ.My originality is usa and japan I was born in the year 1977.My childhood was spent in Japan though.The prematurely calamitous death of my parents brought me to Japan about 20 years ago.My father was killed in a motor accident at tampa airport road.He was on his back to dade city when the accident struck.His death worsened my mother's situation.She herself was going through heart attack before but unfortunately,she could not contain the grief and sorrow of my dad's death.Perhaps i would have still been staying in usa now if not for the way dad's younger brother was trying to make everything impossible for me.I was being pre-empted and maltreated to the extent that i started having an inferiority complex.My unlce[that is my mom;s brother) took me away from him and brought me t
Read more