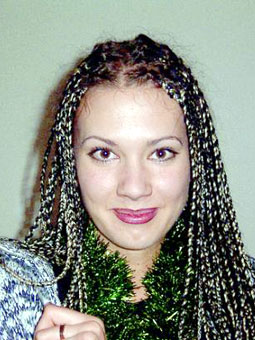 REPORT N1
Gene (USA)
She contacted me thru date meister. Have not heard from her in 2 weeks after she got the money, $650.00.
REPORT N2
Mark (USA)
She claimed to be an only child who’s mother died at birth and who now lived with her aunt because her father was remarried but remains close. She claimed to be a University graduate and to have employment at a furniture company. She claimed to have some money saved but it was only a few hundred dollars as the wage scale is not very high. She also claimed to not have a telephone. She came across as intelligent but somewhat naive especially in regards to travel and the Visa process.
We communicated on a daily basis from January 19,2004 until I finally caught on that this was a scam for money around March 9, 2004. We had decided in our letters that it would be good to meet and see if our feelings were serious. The requests for money were at three times. First she needed money for the airline ticket, second she need more money because she did not purchase a required round trip ticket, I sent her $750.00 first and another $450.00 second through Western Union to Russia. A few days before she was to arrive she claimed the NNVA or agency through which she was preparing the Visa had informed her that she was also required to have $750.00 in what was called “pocket money” to be able to come to the USA. I e-mailed the American Embassy in Moscow and asked about this. The embassy’s customer service department sent me an answer that there was no such requirement and I also confirmed this with US Customs at the Minneapolis/St. Paul airport. I first suspected that she was being cheated by some type of agency and kept requesting names and address’s of whom she was dealing with but she would never send the information. I then received a second letter from the American Embassy in Moscow but this letter was from someone in the Fraud Unit and informed me she believed I was involved in a scam and directed me to some anti-scam web sites, I found Svetlana in three different postings by other gentlemen she had attempted to scam. The letters they had received were identical to the ones I received, only the dating web sites and e-mail address’s were different. Reference is made to family, father’s $40k house, a found 1700 ruble coin, how her friend married through a dating service to a man in Chicago, an urgency to arrive in March because of employment agreements and the mistakes made in the Visa process with a need for money to complete. I also received a very short phone call at work, short because we got cut off after about two sentences. I also recently found her on a talk forum, Greatest Cities.com, a person had posed the question does anyone know Svetlana Kurmakova, there were some 90 replies with one even setting up a web site to expose this person or persons.
I am now under the impression that this is a pretty extensive scam and probably involves more than one person. It is possible that some may even be located in the USA with others located in Russia to enable monies pick up through Western Union. All of the letters are canned and are almost word for word as compared to what others have received. I believe they just post profiles on dating sites, set up multiple alias’s and address’s, then systematically contact others who have posted heir profiles looking for bites. Only the first contact is addressed to an individual, after that person responds and sends a letter, they just keep replying to those letters never creating a new letter.
It is a very disgusting and hurtful scam.
REPORT N3
Michael (USA)
Scammed me for $1760.00, her letters were the same as the other guys on you site recieved.
REPORT N4
Robert (USA)
This girl has contacted a couple of other guy's who I've been in touch with. We all get the same series of letters professing love, a valuable coin found, dreams of being on a lake with your strong arms around her, and of course not knowing it would cost so much for a ticket over here. Can you send money? Watch out for her! She is a snake! I have seen at least 2 different photo's of different women she claims to be her, I don't think any of them are really of her!
REPORT N5
Joe (USA)
Well I was just about to send my 16th email to this girl but fortunatly I was wise enough to do a Google search on her name first and i found this website that told of all her scams and I found all the letters that she sent me in the list of letters she sent to everyone else...Be Careful and DO NOT SEND HER MONEY!!!
REPORT N6
Allen (USA)
Western union reported to me she was sacmming thousands & thousands of dollars. Stopped my second transfer. I lost 600. In february. I had 30 pictures & some of the same lies.
REPORT N7
H.R. (USA)
I have read the letters to Gene, Mark and Michael and mine are identical. She snagged me for $700 Western Union with the travel/visa scam.

Romance scam letter(s) from Svetlana Kurmakova to Gene (USA)
Hi!
I just saw your profile and I liked it. I would like to correspond with you! I do not play in games and I search only serious relations. My name is Svetlana and I live in Russia,
in a small city which named Uralskiy. I am 29 years old and I am ready to setlle down now. Thats why I am seeking for serious partner for my life. I would like to know more about you. Write to me if you are interested, if you wish, I can send you my photos!
Please write me only with
Read more