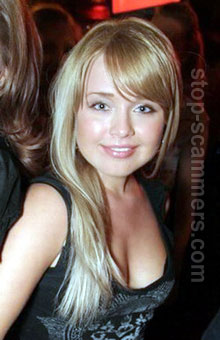 REPORT N1 (added on August, 1, 2007)
Donald (USA)
She tells me she is from russia different neame than on this site at Rbrides.com I will foward you emails with headers..
Tonya, Cherkassy, Ukraine, 22 y.o., Virgo
I am a student. I am smart, good-humored and willing to communicate girl. I think that I am slim view profile...

Emails from Anastasia to Donald (USA)
Greetings Donald!!! I was very glad to receive your letter. How are you doing at you? I'm fine. My name - Nastya. When I was small my parents named me Nasten'ka. Hardly later, when I began more years and already went to school my parents began to name me Nastya. When I stopped to study at university my parents named me Anastasiya. Anastasiya sounds more on the adult. As if my parents wanted to show me, that I have already entered an adult life. And it is valid so. All this my names. You can name me any of these names who is pleasant to you more. I like all my names. And how you were named in the childhood by your parents? I live in remarkable city. My city refers to Novocheboksarsk. This city is in Russia. My city very small, it even it is difficult To consider on a card. My city very beautiful. I love the city for his beauty. In my city it is a lot of trees and bushes. Especially I like my city in the summer when trees put on the The green order. All around becomes green and very beautiful. It very much to like me. I also love my city in the autumn, in the winter and in the spring. But in the summer it is pleasant to me most of all. My city is approximately in 700 kilometers from the city of Moscow. It is rather far. I at once want to be sorry for my possible mistakes. I do not have good skills of work with a computer. At school in which I studied, there were no means to get computers. I used a computer only only a little when studied at univers
Read more