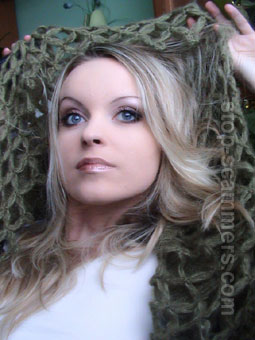 REPORT N1 (added on August, 3, 2007)
Bert (Netherlands)
Hi,
She contacted me first at the dutch dating site on july 7th. I had to write her at her e-mail addresse (see above).
So, I did. After 7 or 8 e-mails and some chatting we have had contact by phone. She called me.
Also we had chatsession at QIP (russian communicating site, it seems)
She asked me to send her 500 euros via Western union, to pay her ticket to Amsterdam. She had the money for visa and other travelpapers by her own.
After I visit the homepage from the russian ambassy in the netherlands, which i told her via QIP, she brokes all contacts.
I noticed in the e-mails;
She never gave an answer on my direct questions to her.
I send her flightplans and flightcosts from Moscow to Amsterdam v.v which were cheaper, same flightcompanies, then the offer of the travelagency she visited overthere.
Regards
Note: very good site,
sorry for my poor english
REPORT N2 (added on May, 1, 2008)
Pascal (France)
Russian visa/travel scammer.
REPORT N3 (added on September, 14, 2010)
S. H. (USA)
Already posted and further proof she is lying Russian **** ***** deceiving men for her profit. She wrote for over a month but her letters shortly showed she did not know how to form a dialogue and suspicions were soon evident of her real intentions.
Lying ****** like this need to be terminated!
Guys, stop being so PC when it comes to this filth, trash them and destroy them so we can reduce the amount of infestation on the Internet.
REPORT N4 (added on September, 14, 2010)
Jose (Spain)
Known Russian scammer.

Emails from Anastasia Baranova to Bert (Netherlands)
Hello Bert.
I am a unique girl from Russia, the Kirov city. My age - 28, my height - 172 sm, weight - 56 kg. I have light hair and dark blue eyes.
Some words about me. I rent the apartment one, my parents, alive in other city. I work as the teacher of Russian at school. Also I have partially borrowed work in social sphere with small children (nurse). I love children so!
Friends speak, that I - the attractive, optimistic, kind and sensitive person. I like to communicate with people, At leisure, I like to visit my friends, reading books, seeing films and cookery. O! Yes, I prepare very good, and I like to create new dishes. Also I like to support the form and to go to a hall of gymnastics.
I - in searches of true love, my best friend and the soul mate. I wish to meet the reliable and responsible person who will be the special person for me. I only require one special person and I have no interest in others.
I am very opened also its lung to learn me so please ask me something.
Anastasiya.

Emails from Anastasia Baranova to S. H. (USA)
Greetings my name is Tatyana, me 27 years. I was born and I live now in city Saint-Petersburg. I worked 3 months in USA in New York. But I did not like there my work. We had very bad chief which wished to oversleep with me. I too there worked as the seller as well as now. But I do not wish to speak about it. And my visa is over. It was on 3 months.
But i have the passport yet. I at once wish to tell,
That at me very serious intentions and mine
The purpose to construct serious attitudes. At once I want
To explain to you why I has chosen the Internet and correspondence with
People from another the country.
First, I for a long time was disappointed in our men,
Because they on the first place have *** and binge,
And serious attitudes in the end of this list.
Secondly, I was disappointed in the politician and
Economic situation of our state. At times to me
In terribly evening to go along the street. I think, that you
You look news.
That at us the plane with terrorists, school with children,
Theatre. Unless I am similar on not the normal person,
That at such situation in the country to get children.
No. I do not wish to sit at home and to wait for my child from
Schools, I think only of that that there that not
Happens, that Something its ***** driver not
Has brought down on road...
I work works in shop of shop of " Jeans ".
I the seller-adviser.
Well will suffice about it. So, as I have told at me very much
Serious intentio
Read more

Emails from Anastasia Baranova to Jose (Spain)
Hello,
How are you doing?
It is pleasant to me to receive the answer from you. Thanks for contact to me. To me it is very pleasant, that you have written me the letter. I do not know why, but I have decided to write to you. I hope, that you have time,
To write me the answer that we could find out about each other more.
And now I will tell a little about myself though you already know a little about me from my profile. To me of 27 years, my name Marina. I was born on September, 25th, 1981 in Russia in small village under the name: Orehovka. It is approximately in 700 kilommetrov from Moscow.
Tell to me about itself.
I rejoice each minute of the life. I try to overcome all failures and obstacles itself. I do not love false, greedy and hypocritical people.
I wish to get acquainted with the fair, kind, serious man and if at all of us to turn out to create serious relations. What do you search in Interne?
I was not married, I live in apartment with my parents. You live with parents? I work as the tutor in a kindergarten. My work is pleasant to me. And you like your work?
Than you are engaged at leisure? I like to prepare to eat on kitchen.
I have many friends and sometimes we with them go to cafe or at cinema.
I prefer a healthy way of life. I do not have bad habits. And you conduct what way of life and whether you love sports? Tell to me.
In my letter I will enclose the photos. Also I want that you have sent me your photo. Also inform co
Read more