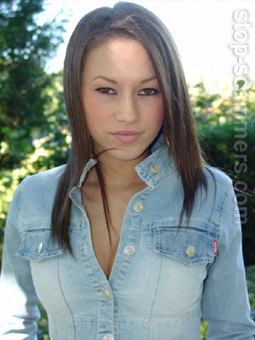 REPORT N1 (added on September, 27, 2007)
Ronny (Sweden)
She did a mistake, wrote that she loves my profile, strange because no one can see it :)
REPORT N2 (added on February, 3, 2011)
Tronya (USA)
Said she was from monclair California. and that she was here on an visa that was soon to expire needed money to stay..Then suddenly went to nigeria to work as a fashion model. sent me 2 checks thaat looked like moneygram money orders. never tried to pass them.. To fishey...and like most other reports i have read. things just never seemed right . no direct answeres to questions. vague on most other subjects. nothing she said seemed to fall together to sound real.
REPORT N3 (added on August, 1, 2013)
Paolo (Canada)
A female befriended me on Facebook. She only had two pics (alone) and a very limited profile. Her profile said she was from California, she didn't have any friends from California or any friends even her age. They were just random people. The account started January 10 2012.
REPORT N4 (added on June, 1, 2017)
Berl (USA)
In approximately September 2016 I received An email from Eva Gregg telling me she was living in Dickerson, North Dakota and was looking for her soulmate. We talked for sometime and decided that she would come to be with me. I ended up sending her $1550 for back rent and a plane ticket. She sent me a copy of her ticket and said it was a direct flight to the airport here, I later found out that there are no direct flights and the ticket was a fake. She sent me a text telling me she was boarding the flight and would be landing here in a few hours. I did not hear anything about her until the next day when I got an email from some doctor in an emergency room telling me she was in the hospital due to an apparent overdose of meds because of her fear of flying. It was pretty obvious from reading the email it was a fake. I later hear from her that she was in England to settle her fathers estate and needed money for court fees, etc. Naturally I refused. I was contacted again by her and she told me she was in the Netherlands attempting to settle her fathers affairs with his partners there. I hear from her once again around Easter this year and she supposedly was in Italy. The entire time she was very apologetic and proclaiming her love for me while she tried to get me to send her money to come back to the US to me.

Emails from Jenny Smith to Ronny (Sweden)
Hello,
My name is janet.I was searching thru while i came across your profile.
You look magnificent...­..I was hoping we can get to know one another.
and my email is moyowood001@ya­hoo.com .
Send me urs so that we can comunicate with each other.
cheers
janet

****,
i m 26, single, from texas, want a long term relationships,­i deals in the import/export of dressing stuffs, thats why i travels alot, i m in africa now on my business trips and i will be there in ur state as soon as i m thru here with the customs.

are u staying alone? tell me more about ur self,
thanks

yea, all i ever want in my life is a seriuos relationships,­ and i hope u may be,,,,,,i will have been there with u but the customs here are making things difficult with me,,, they want me to pay more cash , but all i have here are just my chque and african banks dont cash international­ cheque...

can u help me to cash my cheque and send the money to me here thru western union? i will need to have ur fullname and address,and phone no, so that i can post the cheque to u now.....

i hope honesty is our key word.