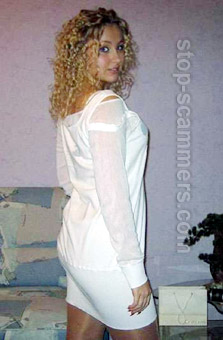 REPORT N1 (added on November, 13, 2007)
Brian (USA)
Started to write about 7 months ago. said she was on an professional exchange with travel company. never mentioned company's name. never asked for money. said I was the last one she ever wanted to ask. came time to get ticket, and documents to travel to usa. went to agency and finished paying off company after they increased her service fee. when she left company. she said small boy ran out in front of her and she hit a foreign car. she had no insurance. the road police gave her the ticket and towed it to a yard. told her a date when she needed to pay it by. she says she went back to the agency and got a refund of some of her money. she never asked but she did let me know that she needed 710 us dollars to pay for plane ticket. she sent me a copy of a iteneray ticket from aeroflot airlines. she sent me a scan copy of her russian passport. said she wanted to prove to me that she was coming to work in the states where I lived. said agency was giving her 2 month of temporary housing to find a permanant resident. have a job line up here when she arrived. said when she got to newyork. they were going to give her 3000.00 dollars to advance her moving. she was unemployed due to the fact she said she gave her two week notice. if I wanted to send her something. remind you that she never did ask. she said she could not recieve it herself because being unemployed. they would not let her recieve the funds. so she gave me a name of irina pokochailo who she says can't recieve it anymore due to the fact she lost her passport as of 11-9-2007. since she couldn't recieve money for her by western union. she gave me a new name if I wanted to help pay for this. evgenija perekidailo. she gave me this name because she says she tried to fly out. but instead of the 710dollars for the ticket. they wanted to charge her 450 more for insurance. sounded not right. being that I worked security for six years at a airport. I knew something was fishy. this is when she gave me evgenija's name for western union. I called the offices of aeroflot in washington, and new york. they do not make passengers pay insurance. like all other airlines. INSURANCE IS AN OPTION!!!! on 11/11/07. I was googling on yahoo on other scam sights. found out why irina lost her pasport or as she says. why she (valentine) was so much in a hurry to leave. within the last 2 weeks. they both were put on a blacklist for scammers. so she is trying to get out of russia quick. valentines email is valentinesweet78@yahoo.com. irinas is viborg77@yahoo.com. what a coinsindence. one addres is 77and the other 78. didn't get one on evgenija perekidailo. the banks that she was usin are the bank of moscow and probusiness bank in moscow.
REPORT N2 (added on November, 20, 2007)
Rob (USA)
This person will email you for a long period of time. Then she says that she just got a work visa and when she gets to the USA she wants to meet. Then she will start telling you she loves you, then she will state she got into a car accedient and that she had to take her ticket back to get money to pay off the person she hit. Then she will start asking you for money so she can get her ticket back. She will tell you to send it Western Union and to make it out to someone else because of her situation she can not recieve money. Becareful she or he is a good one.

How are you? How is the weather there? I hope you feeling good. I have some good and not good news for us. I don't know how to begin. Well, the good news are all documents are done and I can come to you soon. Agency prepared all things for my trip to your country. They prepared all necessary documents and reserved ticket for me from Moscow to New York City. I have paid these services some months ago. So I have a ticket. I just needed to pay for documents and for other necessary service. I got the money and decided to go to Perm town as soon as I can. So I went there to pay and to get documents. I drove my car to move to Perm and to visit agency. When I came to the agency and paid them, I got all documents and ticket. I was very glad and happy! I wanted to come back to my town soon and to let you know about these good news! Here good news are ending. Later are not good news Brian. When I drove car to my home I got accident! The boy ran out to the street in front of my car!!!! It was so unexpected for me, I could react but all I could do is turn my car to the left side! Because at the right side was parked big truck and I couldn't stop without **** to boy at this short distance. The boy ran out behind of that truck and I couldn't see him in time. Because of it I turned to the left and I struck other car!!! It's bad news. But more bad things are the car I struck was foreign expensive car and I would have to pay to fix all dam
Read more