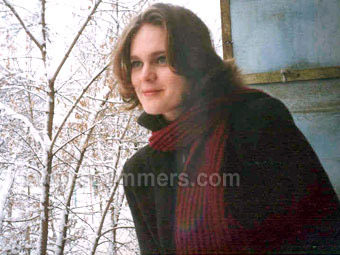 Emails from Evgenia Vinokurova to John (USA)
Hello!
My name is Eugenia. I am from Russia.
my e-mail:eugenia77@pochta.ru
If you send me an e-mail then I will send you my photo and more about me. Please write me on my email. I shall be glad to answer your letters. Eugenia.

Hello my dear friend John.
I feel, that we with each letter become closer to each other. Therefore I can tell to you about my last private life.
When to me was 22 years, I have got acquainted with the beautiful guy. And if to be fair, I loved him very much. I now also recollect him. But it in the past.
I loved him, and I did not notice, that he is engaged in dark affairs. He was a criminal.
He is stole. And I did not notice it.
He spoke, that he works, as the manager in bank. I thought so. I at all did not ask in what bank he worked. We were constantly together. While he has not got in prison. I could not forgive to him it.
He should sit in prison of 13 years for a robbery of bank. Certainly, later I went to him on appointment. He spoke me, that I have forgiven him for a deceit.
He spoke, that when he will leave from prison, he will finish with the past.
He will be employed on work, that he will be the fair citizen. And I trusted him selflessly. I go constantly to him on appointment during 3 years.
And I would continue to go to him further.
But in one day when I have come to him on appointment, the security guard has not started up me.
In a consequence, the security guard of p
Read more

Emails from Evgenia Vinokurova to Scott (USA)
Once upon a time there lived a beatiful princess who knew no sorrow no evil... Still she was not happy because her overcharming beaty was fading all away in deadly loneliness she didn't have anyone to whom she could give her heart. But on a nice heather day she met him, a galant young warrior on a white swift horse. The image of that warrior penetrated deep inside her soul and she set her heart on him...
The autumn sun was shining upon them kissing each other passionately beside a purple waterfall and life was seeming beautiful...
But at nightfall the warrior turned into an **** bloodthirsty sorcerer, his horse turned into a poisonous snake. The princess fainted. When she came to herself she found herself chained to the cold castle wall. The sorcerer was standing nearby. He said' Be mine and we will rule this ****** world together,me and you, my dark queen'
But the princess replied'NO. I cant live without this world, without its green woods,without its fresh rivers. I'd rather perish than give my soul to YOU. I was wrong about you but I believe the day will come when a knight of light will defeat you and free me..." The sorcerer hollered "If it is your last word, be cursed forever" After these words the sorcerer vanished.
And the princess was bewitched in a lonely castle waiting for rescue...

Hello Scott,
You love my story? It - not only the story, some truth it is latent in it. I like as to inform about mine feelings in the extraord
Read more