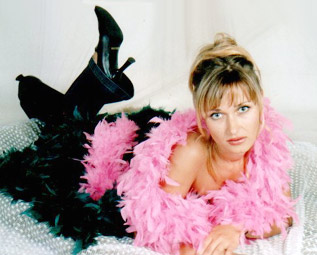 REPORT N1
Ray (Italy)
I contacted this woman in Dec/03 on Absolute Agency, she had an appealing look, something was missing in her life - (It turned out to be money). In her second letter she spilled the sad story of evil ex-husband and mis-trust of all men - it may even be a true story. I actually found it fascinating. Being a genuine man, I decided to help her by writing thoughtful letters, and I must admit, she seemed to come alive and her letters were stunning about how I had helped her - perhaps this was also true. This person is highly intelligent in her writing and attempts at manipulation, she took a while to first ask for money, it took me a while to see through it. But I played along and got her to ask for money an additional two times (just so that I could really get her).
The parts that didn't add up.
1. She was studying English and "soon might be able to speak it fluently", but she needed to pay for it.
2. She had a friend who was helping her with translation, but she still asked me for money for "Agency Translation"
3. Meeting: She said could not afford the train fare to from Kremenchug to Kiev! (despite her expensive shoes)
4. Despite her great need to look into my eyes, she ******** the idea of a meeting until "Spring or Summer" (3 to 6 months)
5. She said she was writing only to me. So I questioned her that she didn't need to be on the Absolute Agency Site because she was using an external e-mail address and Internet Cafe. I offered to take my profile off, and I did, she didn't. So I put my profile back on.
6. She asked for the following costs "The Internet cafe takes the payment for the subscription and using the computer 50$ per month and 5$ for the typing, translating and sending for one my letter. The prices are too high but they know that in any way, the foreign men pay for the correspondence and they think that this price is suitable. I think that as for money, I live in a very crazy country, but you will see it when you will come to me. In a word our correspondence will cost for me at about 100$ per month". She asked enough for 6 weeks, I sent it.
7. She sent additional photos but never asked what I thought. Any self-respecting woman would ask what the guy thinks - they were probably just lures because I was starting to go off her. I told her that I could not fulfil her desires - I did not want marriage or children. (So I was not even what she was looking for).
8. During the next month she mentioned only once about our meeting. Her friend helping with translation was not mentioned again. Then she asked for another instalment of money for Agency and Translation, because she had a debt. I then confronted her about women on the Internet who were asking only for money etc. She replied that I had greatly offended her - (never mind that she put off our meeting for 3 to 6 months, and now never mentioned it - probably the game was up). Despite "having no money" her Profile on Absolute Agency was renewed directly after she stopped writing.
9. I asked if she could explain why she had not mentioned our meeting - she never replied. I wrote again and offered her another chance to explain - before I'd report her to Western Union, the Absolute Agency (for what it's worth) and Anti Scam Sites. She didn't reply, so I asked for my money back. Still no reply.
10. Non of my e-mails were bouncing back as unreceived. So I sent her own photo with "Scammer" written on it. Still no reply. I gave this woman every chance to respond. So she's here now.

Emails from Anna Sevruk to Ray (Italy)
My Sweet Raymond!
I didn't want to make you insulted at all. On the contrary, I thought it would be better. I also do want to meet with you as as soon as possible. That's why I'll be trying to ask the director of my working place to take some days of vacations. I'll try to ask another one assistant in the shop in order she to work instead of me for that time. I do hope I'll succeed in that, because even one a day of communicating to you in the real life will be able to prove us a lot of things, to my mind.
I want to thank you for such a thing that you are ready to rent the separate room in the hotel for me, because I don't think it is a right thins to be in the one a room together with a man before starting with their relations, although we have already the certain feelings to one another. I was taught up in strict rules and traditions, although, of course, I have the modern view to the relations between man and woman. The most important thing I worry about now is our necessity to have the translator. We should solve that a problem. Another one problem is my coming to Kiev. I have one a girl - translator whom I know. I think she won't be against to help us with our communication. Beside that it will cost much cheaper that to hire the translator in Kiev. In order to get to Kiev I'll need to have your financial help, because right now I have run into debts because of all the holidays we had in our country. So I won't be able to pay for my coming
Read more