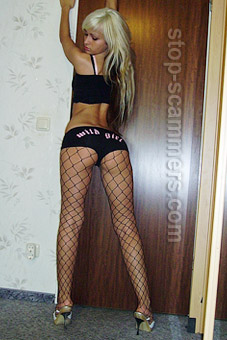 REPORT N1 (added on January, 11, 2008)
Stephen (England)
This all seemed too good to be true. After 2 weeks of emails & me phoning her. She agreed to meet me in Kiev & stay with me in a hotel there, where I would fly to. She lives 200 miles from Kiev & said she would get the train there, & had the money to pay for this. After I booked my plane ticket, she said that the train was fully booked for 3 weeks! She suggested her flying to Kiev... but she didn't have enough money, of course!! I thought best to cut my losses at a plane ticket, as if she asked me for money once, I am sure there would be many more 'reasons' why she would want more. Does she think us men are ******!
Another strange thing, nearly every girl I write to says they have 'lost their phone & I must call their sister's mobile'. What is this all about?

Emails from Albina Artemieva to Stephen (England)
Hi, dear Steve!!! I can't belive that we'll be together soon! Only 10 days left! I'm so excited about this. Today I went to the railway station buy ticket to Kiev. But there I was shocked! There are no tickets to Kiev till 16.02.08 I cried just in front of the ticket office. It was terrible!!! But one woman told me to call to the airport, and may be there is a possibility to arrive to Kiev by plane. I called and found out that there are only a few tickets from Rovno (which is nearest airport)to Kiev. I need to go to to Rovno by bus, than take plane. I had some money which my parents gave me for Christmas and I wanted to spend them for train ticket, but it's not enough for plane. I know, now you started thinking that I'm like other girls from the Internet, and you are disappointed in me. But I can do nothing. I'm not very rich, because I'm a student, but I'm honest with you. Can you help me? Kiss you, Albina.