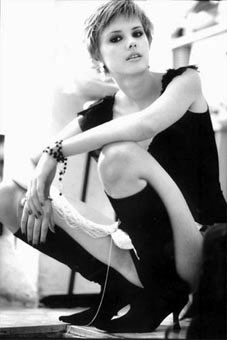 REPORT N1
Frank (Canada)
She contacted me through an old ad on MatchClick USA. The usual crap, after 3 emails I was the one, she was in love, etc. But there was an unusual twist to the story. Her father found out, he was against it, etc.
She never answered any questions and wrote whatever she wanted. Only ever wrote in response to a letter from me. Took 4 emails before she started asking for money. Oh, and her profile has been kicked off Matchclick too.
REPORT N2
William (Ireland)
I conatced this lady on the above web site and we began to correspond for around 2 months. She told me her Father was dead and she lived with her mum. Her emails were always quite innocent and believable.
The last one I recieved was allegedly from her Mother telling me that he was ill will Flu and could not get to the internet cafe. I did not write back. It is only today while searching your site that I found her photographs under a different name. Some of the photos on your file are the same as photos she sent me. My god I am lucky! We were planning a holiday in the sun and she sent me details of an alleged Travel company who could accept my MONEY!!!
REPORT N3 (added on July, 1, 2005)
Edward (Greece)
She got my email address from euroloveliness (I guess, she wouldn't say from where) she sent me 7 emails untill now. In her second email she started asking for money to come to my country.
REPORT N4 (added on September, 30, 2005)
Patrick (Australia)
Nice photos. She's a scammer alright. The stories by email were amazing!
REPORT N5 (added on March, 7, 2006)
Dean (Australia)
Your site is fantastic and I only got onto it by accident because the last Russian woman I conversed with said she had a hobby with aquariums and had metinnises fish and I had never heard about metinnises so I typed this in google and this put me onto your site. I then realised that the exact letters she was sending me were on your site word for word. I have received many emails from Russian woman at least 50 plus messages and all of the Russian woman are attractive as I'm sure most of you have
experienced. Thankfully I am smart enough and would
never send money to a stranger I don't really know. After conversing with these Russian woman via email for a few days to a week or two they would start saying they are deeply in love with me and all crazy weird stuff, NO person can fall in love with a person unless you have met and spent quality time together I believe anyway.
As soon as I asked them for there telephone number not
one of them gave me there number, they all said they
had no phones in there house and asked me to give them
my number, admittedly I NEVER gave out my phone number to any of them. Soon after this they all end up
asking for money and as soon as you write that "you
will never send money to anyone via the NET" then I
guarantee 90% of the Russian woman will never send
another letter. The other 10% will continue to write for a little while and tell you they have the visa all done and have put a deposite on a air ticket so they can reserve the ticket but they need the balance within a week other wise they will lose the deposit, they will then ask you that they need some financial assistance with the air tickets or whatever and once you continue to explained to them that you will NEVER send cash they also will stop writing. Guys please NEVER send cash to any of these Russian woman
especially if you have never met them.
REPORT N6 (added on January, 9, 2007)
Isaac (Canada)
I know Olga at singlesnet and her profile is still posted there right now as screen name deer_lady. In a few letters talking Olga, I found she read my letter and anwser my question carefully. When I asked her to take a photo with some information I pointed, but she could not do that. I think, she is not the one in photos. In her fifth letter, she wrote that she can't live without me and attached a very sexy photo, then she disappear. Two days later, a woman nams Kira contacted me as a translating partner. She told me that Olga could not talk to me again, her contract was over. If I can pay the expense for her, I can talk to her further. When I told Kira I never send money to any company or person in Russia or Ukraine, she never contact me again.
REPORT N7 (added on January, 30, 2007)
Conrad (USA)
Took 4 emails before she started asking for money. Some of the photos on your file are the same as photos she sent me.

Romance scam letter(s) from Svetlana Stepanova to Frank (Canada)
Hello Frank!
How are you ? I am so happy to receive your answer on my message. I hope that my message was so large surprise for you too. Also I want say to you that I have decided to write you thanking to my dad too, he works by the manager and I have use his computer at work. Possible, you can ask me, why I didn't find a russian man? Ok, I'll answer you, that I had a boyfriend from Russia, I loved him very much at last, but he has thrown me at last. He found another girl, as I have understood. Also I've seen that he liked to drink alcohol very very much, as many men in Russia, as you know. I don't like, when men like to drink very much! I'm non-drinking and non-smoking woman. Simply, I don't have a harmful habits. Also I hear taht men from other countries are very good and they can to appreciate and respect women as considerable men too. I can speak English, but not very well, and I have decided to find the man from your country. I see that I make many o
Read more

I have more recently learned to work on the Internet and have casually gone on a site where has found your profile. I very modest girl, but I nevertheless have dared to write to you as I think that communication with the person from other country is very unusual! I never communicated with people from other countries and I simply dream to find in your person of the friend with whom it is simply interesting to communicate and share news! You the first to whom I write and I hope, that our correspondence will have the good beginning! Now I sit in Internet - cafe and I write to you this letter! I think, that time has come to get acquainted! My name is Natasha. I from Russia, live in the city Mari-Turek. I'm 26 years old. My growth 175 Centimeters. My Birthday is July,8. On a horoscope Cancer. Nationalities I am Russian. My religion: the Christian. On character I the sanguine person: very cheerful, kind, vigorous and in a measure m
Read more

Romance scam letter(s) from Svetlana Stepanova to Patrick (Australia)
Hi!!! My name is Tatiana. I was interested by your profil. I want a message with you correspondence. I search for the man for the serious relations. My electronic address: poiuy75@mail.ru

Hi Patrick.
I am happy, that you again to answer to me. I think, that it will be interesting to you to learn (find out) about me. I live with together with the mum. At us with the mum the very good attitudes (relations) and she (it) my best friend, assistant. She (it) the most dear (expensive) man for me. I very much to love and to respect her (it). We always with it (her) can find general (common) language. I to think that you are good to understand it. My mother still to not know yet, that we to write each other. I for the present to not know its (her) reaction to all this. But I to think, that she (it) to understand me. I to think, that it (she) all the same should tell all.
Today I to tell it (her) about it. At me is not present from
Read more

Romance scam letter(s) from Svetlana Stepanova to Isaac (Canada)
Hello Isaac!!!! When I have said that it will be nice to hear from you at my e-mail address I had no idea how it would really be pleasant to get a letter. And not from somebody - from a man who lives kilometers away, but has a desire to make friends with me or even to start a relationship. I am a new person to Internet - the thing is that we don't have that many people in Ukraine and particularly in Kharkiv who use Internet. Actually I am not really used to write letters, but will try to tell at least something about myself and my life so you will have an idea with whom you are talking to and will highly appreciate if you will tell me the same about you. Thank you a lot for the photo. I liked it very much. i find you really attractive man( although appearance doesn't mean anything special, inner world is the most important). I'm very interested in you and your personality. So, what about me...I don't even know what to say - I am an ordinary girl who has dr
Read more

When I have said that it will be nice to hear from you at my e-mail address I had no idea how it would really be pleasant to get a letter. And not from somebody - from a man who lives kilometers away, but has a desire to make friends with me or even to start a relationship. I am a new person to Internet - the thing is that we don't have that many people in Ukraine and particularly in Kharkiv who use Internet. At first I was very suspicious about searching for a real life partner over the net. But I think that it is hard to find true love in a bar or nightclub. Also you have to be ready to commit yourself to another person and it is really good that you can make your goals clear over the Internet as to what you are looking for. I think it is a great way to meet people. As for the age of the person I want to meet- I don’t care. It may seem surprising and unbelievable. I'd like to find a nice men with a good heart to share my life with hi
Read more