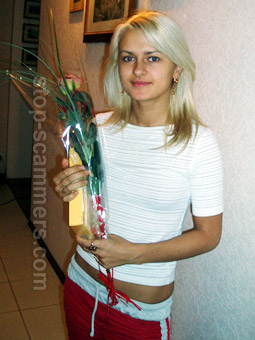 REPORT N1 (added on April, 9, 2008)
Dadelus (USA)
She says she is sick with a sickness called low eggs. also asks 4 money 4 college. i caught her in her lies by talkin 2 other men she had been speaking 2. found out she had asked them 4 money as well. i met her on livejasmin her model name is bounty.ladyjoyy,and monamurrrr1. always says she is sick and has no place 2 stay and no money as well. ionly 2 find out that she has been getting money from other men as well out partying at fancy clubs in kiev like papita and arena.
REPORT N2 (added on September, 28, 2009)
David (USA)
I have been corresponding ,and talking to Irina Goretska since June of 2006.I met her on a website www.livejasmin.com.She was a cam sex girl. Almost immediately she started asking for money for different things such as illness,operations, school,and living expenses. I have over 1000 txt messages,e-mails,and yahoo messages from her,asking for money for operations for her,and her mother. She claimed she has a disease called low eggs,and also needed money for an operation for cista (cyst).In December of 2007 she asked me for $500.00 for an operation to remove a cyst. She also asked other men for this money. I gave her $400.00 towards the operation. She was to have the operation in late December of 2007.Well I have some photos of her partying with her boyfriend,and friends only a week after this operation enjoying the $400.00 I gave to her. All the time her telling me she loved me,and thanking me for saving her life. This is only one of many scams she has asked for money for illness,or operations,or living expenses. It seemed like every time she asked for money,and I gave it to her she professed her love for me,and then she disappeared for a few days,me not being able to contact her. And then when she did contact me,there was always some emergency,and need for money. In the past 3 years I have given Irina Goretska $11,000 in WU money transfers,and spent $5,000 in gifts for her and her family. All of this in hopes of the day we would meet. This brings us to the present day.Ive been in contact with her all this time. I didnt have contact with her between the middle of April this year,till the beginning of August this year. I sent her a txt message asking how she was,she replied she was having back pain,and her cyst was bad,and she needed to see the doctors. She also told me that she wanted me to come to see her,and she still loved me. Well,I sent er 200.00 for the doctor. I kept asking her to go on yahoo so we could discuss me coming to see her,she kept making excuses about not having internet,that the computer was brokenso I sent her money for that.Guess what? still no computer,and Inet. We had an argument about a few things on Aug 31.I beleive that me expressing my doubts coming to her after not talking to her for a few months hit a nerve with her. I think she realized I was suspicious of her intentions,and her attitude changed towards me.I think she was trying to set me up to get money from me for the hotel,and other things. Well I felt bad about the arguement,and sent her some roses,and gifts. The delivery company said she was very happy to get the gifts,and she was smiling all the time. Well,when I viewed the video of the delivery,I knew something was wrong. She seemed nervous,and as if she was getting gifts from a total stranger. I called her that night,and she said she received the gifts,thank you,but was sleeping,and could I call her tomorrow. I called her the next day,and she didn't answer. She didn't answer my calls for 2 weeks. I sent her a card asking her to contact me that i was worried about her.When the delivery company called her to deliver the card,she answered,and said she was not in Kiev,they asked her to speak to the manager to reschedule the delivery,and she hung up the phone. Irina Goretska answered her phone today after i txt her telling her I know shes a scammer,and I will report her to the police,and US embassy. She does admit to having a boyfriend,She said she has known him a short time,and fell in love even after telling me she loves me,and asked for me to come to her! There has been conversation between us today,and I believe she is afraid of getting caught,so she keeps telling me she respects me and is trying to soften me up. I believe she is scamming others at this time.