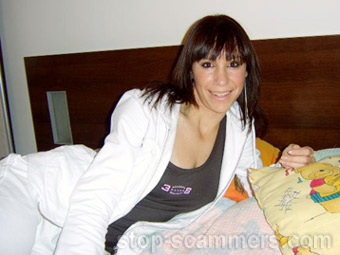 REPORT N1 (added on May, 7, 2008)
David (USA)
There was an immediate attraction. Within just a week, we were talking marriage. She agreed to come over to the USA to meet me and if all went well, we would be married. She didn't have enough $$, so I sent her $950. Then she said it wasn't enough because she had to have a round-trip ticket. Next, she wanted to go to Lagos, Nigeria purportedly to work with her friend Anita for USAID. She went, and then purportedly came back to the UK and still wanted to come to me, so I ended up sending her another $1700 for cost of visa renewal and plane fare. Then her mother purportedly got sick and was hospitalized and she used my $$ to pay the bill. Next, she assured me it was ****** of her, and convinced me she was sincere and I sent her another $1300 with her assurance she would use it only for the plane fare. She was to depart London on Thursday, April 17th and arrive at DFW airport that afternoon. She didn't show up after I waited four hours. The next day I received a call on my cell phone from a man with a strange foreign accent telling me Abbey had been in an auto accident and was injured but would recover. I contacted the UK police for verification. Their investigation revealed the scam. There's more details and I''ve saved all communications, pictures, etc. When I confronted her about it, she has since refused to respond. Its clear to me I've been had, and I want to share this with others to prevent her from doing this to others. Thanks for your site

Emails from Abbey Pestana to David (USA)
What is really ur problem?Why are u such a nit-wit.What was that u reported me for?Are u trying to paint me red in front of the world?I already have everything sorted out and was going to leave from tomorrow not until when i got the news of u posting some ****** and crazy story about me scamming u...What do u take me for?Maybe u really don't deserve the joy and love i'm willing to share with u......Been out in London trying to resolve things for my coming over and u're already going out of ur ****** ***** mind to write some kind of ****** articles about me.I think i will need u to provide me with information where u need me to have ur money sent back to asap..