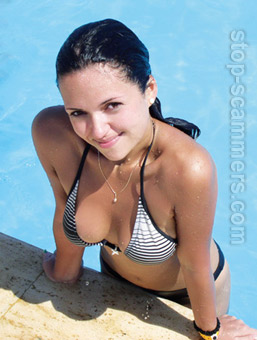 REPORT N1 (added on June, 23, 2008)
Michael (UK)
Passport/Visa scam.
The scammer claimed she could wait no more, and wanted to visit me after 10 days!

Emails from Marjana Lolova to Michael (UK)
Hi, Michael! Thank you for your letter. It's really nice to get in touch with you. Hope this acquaintance will lead us to something serious and nice, and we just need to make it so:)

Well, these are our first letters and I suppose we should start from telling each other at least some basic facts about ourselves and it's a shame, but I really don't know where to start from:) But I'll do myself best in this and will tell you all those things that I'll remind:))

So, let's make this acquaintance as much resembled to the acquaintance in the real life as it's only possible. So, I start from telling my name, though you could already knew it and as well you could forgot it:)) So, my name is Marjana and I'm 23. I live with my parents and granny. She is very old, and she left alone after her husband's death, so she lives with us. You know,Michael, maybe this story won't be so much about me, but I just was so astonished when I heard the story of my grandparents love. That was there first love for both of them. They were together from the school, they studied at the same institute though on different departments - grandpa on the Historical, and grandma on the Philological, and they got married when they were 20. But in 24 years by grandpa died, he was an archeologist, so he traveled a lot and was in different countries. And he had a hobby - its' called something like rafting, but when he went with his friends for the last time he drown. It was a real
Read more