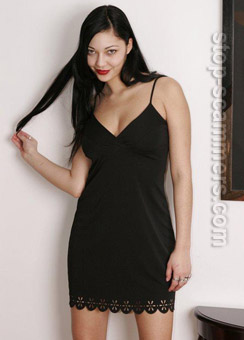 REPORT N1 (added on August, 2, 2008)
Peter (Holland)
She has take contact me on a dating site, afther a view days she say. that she wants to com to me but she has no money for a ticket. i have pay !!! then she get in a cap to the airport. i have wait and get a mail from the hospital in Lagos that she has a bad accedent. now she will have mor money for the bills. i have now about here that she do this more to others.
REPORT N2 (added on October, 3, 2008)
Hans (Sweden)
This woman is very good at what she is doing and sends **** pictures (new ones that I could not see here). She fooled me for days but then she was asking for money to get a passport and I'm sure she is going to ask for money for a plane ticket too. Suddenly she is in a hurry. It's like she lost her patience and wants to get it over with. I''ll try to get more info from her.
REPORT N3 (added on January, 6, 2009)
Gerry (USA)
She contacted me in yahoo, I discovered she was a scammer, then later she contacted me with same name and pics in hotmail. I confronted her about her being a scammer after I got some information about her.
REPORT N4 (added on January, 28, 2009)
Herve (USA)
There are other scammers on the site that used the same picture, samira and jones.
REPORT N5 (added on January, 28, 2009)
Clinton (USA)
SHE TRYED TO GET MONEY FROM ME BUT I KNEW WAS A SCAMMER AND YSHE MADLY IN LOVE WITH ME FROM THE START DAY WE TALK.
REPORT N6 (added on July, 22, 2009)
Jay (Canada)
Asked me questions to find out who i am,then answered with all the right answers. this one,s smooth. had me believeing all the way.friendtold me to look here and wow there she is...watch out for this one.
REPORT N7 (added on July, 24, 2009)
Daniel (Australia)
Hello
I am reporting this girl abigail jones.
She in already on your site but this picture is not..
You have her down as samira rashida.
She contacted me on mate 1.
Then we moved to yahoo messanger to talk.
I soon worked out she is a scammer visited your site and there she was there.
REPORT N8 (added on June, 3, 2010)
Jack (Netherlands)
This lady asked for a expensive laptop and money for a fund for food.
REPORT N9 (added on July, 29, 2011)
Peter (USA)
Contacted my said she met me on zoosk chat room (was never on it ). started chatting with her and after a couple times had said she needed money so she could show me her on a web cam sent me many pics.
REPORT N10 (added on June, 28, 2012)
Christopher (USA)
Lost all info before when you asked another question when I submiited. She contacted me about 10 days ago form seniorsmeet.com. Eventually she started asking for money a little bit at a time. I ended up sending her a tracfone and $20. A couple of days later, said she could not pay the bill to stay on line unless I would send her money. So, even thought I was a little suspicous, I sent her $150, because i still wanted to chat with her. then she asked for money for a plane ticket to come be with me. I denied her request saying I did not have enough money. Then the next day later, she sent me a sob story about needing $$ to get here grandpa out of jail. I again told her I could not afford that. She is still asking me for $$$$.
REPORT N11 (added on June, 19, 2018)
Bill (USA)
This "girl" is pretty good and I can see where someone could get ****** in. After the initial professional photos she sent, I knew I was probably being scammed. But even I looked at those photos and thought, "if there’s a chance..." So I played along. Plus I wanted to see how long before she asked for something. I think, as I pushed for "real" photos, "she" saw time was getting short and "she" needed to win me over, thus the flowers. Almost worked. Until I pressed for more "real" photos. Not the professional ones "she" had been sending.

Emails from Cumisha Jones to Herve (USA)
How are u doing for me? honey are u ok with me ? i have been coming online to see if u are there or not ok, but u are not online why and what is wrong? i miss u so much and i cant stop thinking

Hello my darling.
well thanks u very much for the money u sent me and how are u doing for me? my dear i want u to mail me some infromation ok,.

my love please give me the name u uesd to send me the money trues westernunion for me? and what is the Question u uesd? and the ans? hope u give me all, love u with all my heart and i cant wait to be with u very soon, love u so mnuch, big kisses for u alone, and i will send u some **** pics tommrow ok, i love u so much

I am Vivian.i am 30 female with no kids ...never been married...5'7 feet tall and athletic and I was born in Australia and raised in Ghana and my race is Australia My heritage is English,may be u may ask what i mean by my heritage is English is all cuss our Colonial masters was the British and my dad is a British man, my religion is a Christian,never mind about me been a Christian so let us see what the future would hold for me and u. Am student i study accounting and i just completed my education and had master degree in accounting. Talking about who i am;am that easy going type, adventurous, romantic, ambitious and have a very good sense of humor.. THANK YOU MY DEAR

When one door closes another door opens; but we so often look so long and so regretfully upon the closed door, that we do not see the ones which open for us...He who refuses to embrace a unique opportunity loses the prize as surely as if he had failed...When you come to the end of your rope, tie a knot and hang on...If you have made mistakes, there is always another chance for you. You may have a fresh start any moment you choose, for this thing we call 'failure' is not the falling down, but the staying down...It doesn't matter how many say it cannot be done or how many people have tried it before; it's important to realize that whatever you're doing, it's your fir
Read more