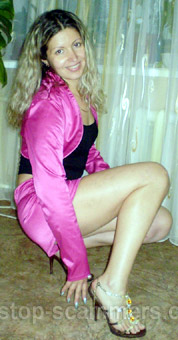 REPORT N1 (added on August, 18, 2008)
Tyrone (USA)
Stop-scammers.com,
Over 1000 letters have been sent between myself and Marina Kononenko. Naturally, I paid for all of the translated letters that went though her translation agency in Lugansk. Also, many letters of a simple nature were exchanged through her home email address, where she claims to have had only a limited knowledge of English. I have since found out that she knows English very well (spoken & written) and actually works part time at the Lugansk translation agency as a translator.
The attached emails are some of the most recent until her scam was revealed to me by a friend who trapped her using her own scheme by posing as two different men interested in her. I have all of these letters/photos that she sent to these "other men" and it proves to me without a doubt that I have been taken on a very expensive ride for the past two years while she "entertained" a multitude of other men interspersed between my visits to her. So, my friend was able to "out her" and turn the tables on her scam, which she was unable to explain!!!! Even scammers can be embarrassed!! It does not get me back the thousands I have spent on her and her family, nor the wasted time and energy on my part. But, I want to stop her game and warn all men to stay clear - she is a vampire!!!!!!!!!!!!
The interesting aspect to the attached emails that she wrote to me, is that she was writing emails to other men at the exact same time that these emails were being sent to me. In fact, some of the exact same paragraphs in the letters to me are also present in the emails she was sending to these other men! Audacity at it's highest degree!!

Emails from Marina Kononenko to Tyrone (USA)
Hello my dearest Ty!!!
Thanks for your letter!!! I want to wish you Happy Independence Day!!!!!!!!!!!!!
It's good that your treatment was not very painful. But the most important this treatment bring you good results. I truly believe in better and that everything will be fine!!!! yes,you are totally right that all these medical problems came at the same time;((( My father will stay in the hospital from Monday. As for Sveta we will wait a little bit with her treatment because it's really very hard financially. We will start it soon. But please don't worry about it,I know that your treatment is also very costly,I just share it with you without any willing to ask you for help,please understand me,ok? I am so sorry to hear about female donkey:((( But may be everything will be fine and shots will help her. inform me about her in the future,ok?
I don't have any special plans for weekend. May be will do my house work,usual thing. I think i need to deal with preserving cucumbers. We will need it in winter. I like to make salads with such cucumbers,pickles,and just to eat it,it's very tasty.
The weather here is very changeable. But it's not cold. May be,if the weather will permit we will go with my friends to the river,to enjoy nature and fresh air near the water. I don't like to stay at home during the weekend,I feel myself lonely. And especially when you know that it's wonderful to spend time out of the town:))) it's a big pity that we don't have an
Read more