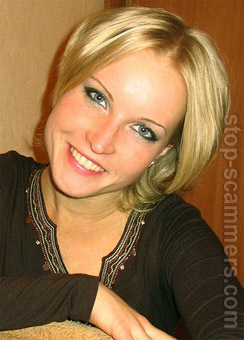 REPORT N1 (added on August, 19, 2008)
Michael (USA)
I met Victoria at Elenamodels. She was not as impatient as most scammers. We messaged each other for 1 month before she asked me for money.
REPORT N2 (added on December, 11, 2008)
Jonas (Germany)
I met this ***** on ukraineloves. I have sent this report there as well. I had called her for a coupe of months before we decided to meet. I went to Kiev and stayed there 8 days. All this time she was nice to me. She was showing me around and seemed so immaterial.
On the 6th night she stayed with me at the hotel and in the morning told me that she wanted me to buy her a new computer. I was sort of shocked to be asked for something like this so suddenly. She said that she asked me about this because I wasn't a stranger to her but someone special. She definitely meant that I should have bought her a computer because she spent the night with me.
I was really disappointed. Guys, be careful!! She is very sly. She turns into a real ***** when she doesn't get what she wants. She dumped me after she realized that she wouldn't get computer and didn't even come to see me off to the airport. I hope this reaches other men before they fall into her sick trap.

Emails from Victoria Sugulova to Michael (USA)
Hi, dear.
It was nice to hear your voice yesterday! You know, every time we talk you make my heart beat so fast!
Michael, I have a problem. Yesterday my computer broke down and now I have to go to Internet cafe to send you e-mails. :( I wanted to have it repaired but they say that it's cheaper to get a new one... What shell we do? Is it possible for you to send me money so that I could get a new one?
Thank you in advance.
Yours,
Victoria
p.s. I miss you and I long for the day we will meet in real.