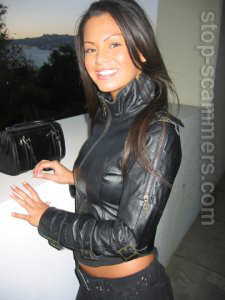 REPORT N1 (added on August, 28, 2008)
Nicholas (England)
Beware, this alias is very dangerous!!!
At first, I met this alias on a dating site. According to the alias's profile, the alias claimed to be living in Devon, England and self employed. When I received an email from the alias, I thought great, she lives near me. After replying to the first message, the alias sent me another message containing the alias's email address. I was then told the reason why there wasn't a pic on the profile was because the alias didn't want other male user's treating her as a *** object. My theory is that the alias would have trouble getting the fake pics approved!
Must admit, I really thought this person was genuine. Besides, I have communicated with a few of these devious creatures before!
Once I opened the alias's first email on msn, the alias then claimed to be from Benin (West Africa), and working for a public relations office in a charity organisation! I knew straight away I was dealing with a scammer! The bit that made me laugh; the alias described where Benin is located within Africa (Quote: 'neighbors countries like Togo and Ghana') the alias didn't mention Nigeria! I Wonder why!
Another inconsistency (Quote: 'My profile was registered by my cousin who got married to someone out in Belgium and they both met on this dating site too, so she registered me when she traveled to see the family of her husband in England') Make up your mind, Belgium or England?

Also a lot of poor grammar and the usual spelling mistakes which is usually composed by scammers!
Then I thought to myself, I can have a bit of fun here. It's not the first time I've played games with a scammer!
I pretended I was dieing of a brain disorder, only had 3 months to live and inherited 50,000 pounds in sterling from late uncle. The alias brought in to it! I was experimenting on the true nature of a scammer! Are they human? Obviously not by all accounts!
To cut a long story short, I said I was going to commit suicide and leave my 50,000 pounds to the alias. The alias immediately replied with kind words and plenty of charm, and pretending to be deeply upset. approximately 2 emails later, the alias said, (quote: 'the only way I found out that I can get money easily and fast is through Western Union Money Transfer')
My conclusion: This alias will hide behind religion, charms, wit, beautiful modeling pics and probably his/her granny to get their way. This alias demonstrated it is inhumane, calculating, devious, and above all selfish. I have nothing to hide, read the letters. It's all there!
My opinion of alias's personality is similar to a maggot, rat, cockroach, leach, and a green fly!!!
REPORT N2 (added on September, 4, 2012)
Joseph (USA)
As reported by the first person to identify this scammer as very dangerous, I can report that she is also lethal. She was sent to me by the Network to set me up for their goons to try to **** me. I know too much about The Network organization and also have reported them and their scammers to NBI, which is the Philippine equivalent of the USA FBI. Her job was to lure me into Benin where the Network enforcement people would be waiting to **** me.
This organization has already killed a senior citizen like myself in the City of Davao, Philippines in January of this year to shut him up so he would not give information to the police or Philippine NBI about their Scammer operations in Davao City, which has the largest concentration of Scammers second only to Manila, Philippines.
Since I have been scammed out of a total $15,000 over the past 6 months by many scammers on multiple dating web sites that I now have on contingency contracted a special investigator who specializes in Romance Scamming and reports to me on each attractive woman that now approaches me on the dating web sites that I have an interest in. That is how I have gained so much knowledge of The Network, which is an organization of Nigerian Scammers that has infiltrated most of not all of the dating websites throughout the world and are making billions of dollars each year. Even when authorities take action against them, like they did in Thailand in January of this year, they were not able to shut them down completely and thus they are still operational.

Thanks for your kind message....I believe as we come to read and write to each other,we will know what really we do share together and also want in life too...Maybe, getting to know some unique thing about life in each others wants..Lets know what the future really holds.

I,m Jane Scott as you already know and i work and live in Abomey-calavi a suburb in the Republic of Benin situated in the western part of Africa and neighbors to countries like Togo and Ghana.Both countries represented Africa at the just concluded soccer world in Germany so i guess they are popular and you might them.Better still you could look up Republic of Benin on the world map or atlas...My profile was regstered by my cousin who got married to someone out in Belguim and they both met on this dating site too,so she registered me when she travelled to see the family of her husband in England.

I am open minded,simple down to earth person.i,m happy we share some in common.i believe in the maxim of universal tolerance,i traveled my country but would love to see parts of Europe,America and maybe some day the rest of the world like Australia,Asia and the middle east by God,s grace soon although at times i Nick't like flying as i prefer road transport where possible,hey Nick't assume am a coward ha ha ha.

I work as a public relations office in a small but growing charity organization here in Benin.We help to fight poverty and ***/AIDS ,amongst childre
Read more

I was caught coming across your profile and it got me looking into it and writing to you too. I am Adah by name and I am new on this dating. I will like to know you much more and I hope I have not disturbed you?

Hope you having a wonderful day out there?

Thanks so much for your time and good to see I have e-mail address email from you. I believe our writing to each other here and meeting from the site will give us a room to getting to know each other more, what our reasons are in life and more that I believe with time we will get to know about each other much more.

I'm Adah as I have told you before but my friends call me Bennie mostly in my work place which is my nick name, I live in the Republic of Benin, and I mixed the Beninese and French. My mother is a Beninese and my father is from France. I was born in France but have lived all my life here in Benin since I was a little girl. (I hope you do not have problem with our differences in culture and distance as well?) Do you support raci
Read more