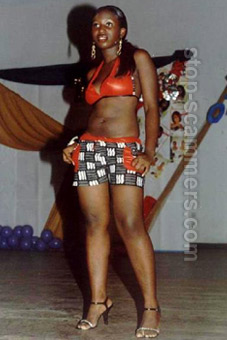 Thank you for your mail, How are you doing l hope you are doing fine. Well you may not have known me but i want you to know that i did received your message in my private box, am jolie, I hope you are a good and honest person. I am the daughter of ' late Sir.Denis Isaac,
The prominent human right defender and chairperson of the Somalia in the capital city Mogadishu, who was suddenly assassinated on the 3rd of October 2006 has been a shock to my mother and my siblings.
Well during my late Father death threat, he gave my mum the total sum of $6.2M USD for the up keeping/future of his family. This money was deposited with my name in a security and finance company in Dubai and was coded under a secret arrangement as a family treasure. This means that the security company does not even know the content of this Metal box.
Since the death of my father, the Somalia government has blocked all our Dads account, Also My father's wicked brothers has succeed in collecting from us all the properties of our late father, trying to leave us with nothing for our future.
They threatened to **** me too because they believe that something is left some where and am the only person my Father confide on when he was alive and that was why l left Dubai back to Dakar for fear of been killed me too by this evil men.
My Dear, I am contacting you because I want you to help me in securing the money in the box, It kept for the future of my entire sibli
Read more