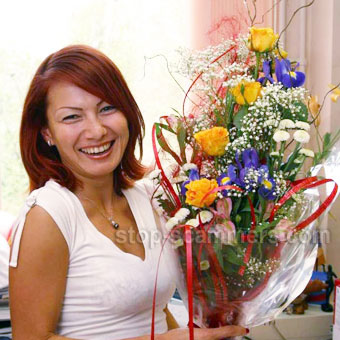 REPORT N1
Jerry (USA)
Tatyana first contacted me Jun 7 04 said she was a dentist. Her father left when she was little. Her mother died when she was 16. She sent me a copy of a fake visa then said she had purchased a plane ticket but needed $432 USD to finish paying for it. To send money Western Union to Tver, Russia. I said give me phone # of ticket agency and i would pay balance to them. So she borrowed money from friend. Day before she was to fly to US she claimed Airport Services demanded $500 USD to allow her to board plane. Said she was told she would not be allowed in US with no money. I e-mailed back the US state dept. Said she did not have to have money to enter US. She also actually called my home phone twice and we spoke briefly.
REPORT N2
Steven (USA)
Claimed she was coming to US and then received e-mail stating Airport Services told her she needed $300. to board plane and asked for this money to be sent Western Union.
REPORT N3
William (USA)
She wrote me and then wanted money. I did not send her any money.
She asked in 2 letters for money. The money was to help get her here to the USA.

Emails from Tatyana Kuzminykh to Jerry (USA)
Hi, my new friend,Jerry!I bring apologies for that that not at once has answered you. I am glad that you have answered me. I was not sure that you would write. Thank you that you found time for the answer. I think that you have many questions for me.I will try to tell you everything about me. I hope that you will tell me about yourself too. I don't know what to tell you about myself at the beginning, but I hope that you will understand me.
OK I will try to begin. My name is Tatyana. My friends call me Tanya. You can call me as you want. I won't be offended. I am 30 years old. I was born on February 10 in 1974 year.
My height is 5 feet 6 inches. My weight is 115 pounds. Probably you will be very much afflicted when you find out that I live not in your country. But I very much hope that it does not frighten you, because I the same lady like many other ladies living in the different countries. I the same person with heart and soul.
I live in village Shchekino. Shchekino is situated near town Tver, Russia. Tver' is 167 km west from Moscow. There are near 2 thousands people in Shchekino. It is a very old village.
I began to get education in the secondary comprehensive school. After I finished it I entered the medical college. I finished it with excellent results and entered Medical University. At present I work in a small Dental polyclinic. I work as a dentist. We have a little collective, but very friendly. Jerry, I shall have an opportunity to send you l
Read more

Emails from Tatyana Kuzminykh to Steven (USA)
Hi, my Steve.
There is a fine news to me and to you - I have received the visa. I send you it. I shall have also vacation on August 4.
Today I went to the company which reserves airway tickets. I asked them how I can reach Philadelphia (PHL) and how much it costs. They answered me that the ticket costs $ 2841 USD. I asked them to find cheaper tickets, because this price is expensive for me. They answered that they had a cheaper ticket but the beginning of the flight 6-August-04. It costs $ 2196 USD. I asked them to reserve a ticket. But they refused, because they have a lot of clients at this time and they can't reserve my ticket without advance payment. At present the period of a vacation. Therefore many people use airflights. I spoke with them for a long time and asked to reserve the ticket for me without advance payment but they didn't agree. Then I wondered if it is possible to pay a part of the money now and the other part later. They didn't agree. I spoke with them for a long time and I managed to persuade them. They agreed. We agreed that I would pay a part of the price today and the other part later.
I paid $ 1362 USD. But it was little for an initial payment. Then I went to the pawnshop and pawned my silver and gold embellishments for $ 416 USD. It was my last money. The number of the flight on which I reserved the ticket is Aeroflot-Russian International Airlines 229. The time of departure from Moscow is 10:45 am.
The time of arrival in Phila
Read more