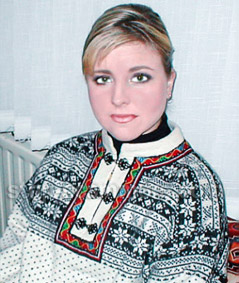 REPORT N1
Jeff (USA)
"Anna Zareva," or Anuta, Annushka, or just Ann -- was an early responder to an ad I placed through Elena's Models. It appeared in a number of outlets, and I don't know which specific one Ann (or whoever she is) replied to. Her first message to me was on June 23, 2004.
Thereafter we e-mailed each other regularly for about a month. Early on, most of her messages included one or more attached photos showing a gorgeous blonde. These became increasingly risqu? until she was sending actual nudes. But the most remarkable thing about Ann was her wonderfully dry sense of humor. She told funny little stories about her work, her daily life, her 8-year-old daughter Karina and her weekend outings. She wrote in a charming kind of broken English that sounded oddly like Natasha on "Rocky and Bullwinkle" - an American's idea of how Russians talk. It had errors, yet she also knew many idiomatically correct phrases and unusual words like "antediluvian." I suspect she may not be a Russian speaker at all. But the impression she gave was one of high intelligence and brilliant wit. She was also very affectionate, called me "honey" and "darling," and asked what seemed like genuinely probing questions about life in America.
I didn't know yet about visa-and-ticket scams, and it was I who first proposed arranging to meet. Ann suggested, but also discouraged, my reimbursing her later for her travel expenses, and instead had me arrange to pay her local "travel agency" ahead of time by wire transfer to its bank account. The first warning sign to me was the travel agency's low profile - just e-mail, no web site and no listing in Leningrad's English-searchable yellow pages. When I searched the agency through Google, what came up was profile #412, Evgenia Minakova, on www.stop-scammers.com. "Evgenia" not only used the same agency but had exactly the same e-mail address as Ann! I knew this was trouble, but Ann had an explanation for it, and since she was the most appealing of more than 250 respondents to my ad I went ahead still hoping that she was for real.
Meanwhile I was subscribing to a newsletter from womenrussia that explained scams and linked me to its "blacklist."
Here I found Ann listed with a slightly different English spelling - "Tsareva" instead of "Zareva" -- but the identical M.O. It turned out her funny stories were different versions of messages she had sent to at least one previous victim. Finally, I ran an e-mail tracer program on her messages and her travel agent's, and this showed that they were coming from the same IP address. At this point Ann was still waiting for me to pay the 715 euros needed for our impending rendezvous, so I took the opportunity to see if I could learn anything more that might help put her out of business. Claiming that my bank was delaying the transfer, I got her to send me the "travel agent's" street address and passport number. When I then let her know what I knew, she stopped writing (July 31, 2004). Despite everything, it's still hard for me to believe that "Ann" isn't real. Whoever created her has the fiction-writing skills of a fine novelist.
Here are the details I learned:
Anna Alexandrovna Zareva
187000, Stanislavskogo street, 4-41, Tosno, Leningrad region, Russia.
7-8136120888
Passport number 41 00 242015
e-mail: ants0441@list.ru ["Ants0441" or "Twostars"]
Travel Agency "Olga Bordovskaya Esta Tosno"
187000 Lenin street 90 Tosno, Leningrad region, Russia.
estatosno@mail15.com ["Esta-Tosno"]
Bank account:
SWIFT code of bank: SABRRU2P
Name of bank: Saving Bank of the Russian (Severo-Zapadny office)
St-Petersburg
Number of account: 42307978255385000011
Account holder: Olga Bordovskaya
187000 Lenin street 73-56, Tosno, Leningrad region, Russia
passport number 41 02 811755
"Girlfriend": Gertruda Kalugina
Lenin street, 37-51, Tosno, region of Leningrad, Russia

Romance scam letter(s) from Anna Zareva to Jeff (USA)
Hi.
I saw your photo in Internet and I've read about your searches of future soul-mate. I would be happy if you'll answer my message. My name is Ann. I have one daughter, because I was married but now I'm in divorce. I am 27 years old. I live in Russian town Ushaki. I wish you all the best and I'll be waiting for answer. Ann. mailto:ants0441@list.ru
PS Are you writer-humorist? Very interesting.
I can narrate you about my life here, in Russia.
It's one big joke, you know.

Jeff, hello, honey. Thanks for your answer!
I've just came back home from St-Petersburg, safe and sound. I'm alive. It's good news. So, we with my girlfriend met each other, and few hours we have pottered along the city center and Nevsky prospect, haunting thresholds of different shops and staring at show-windows. Certainly we chattered unceasingly, shaking out from ourselves all collected news of last century. After that we have very nearly fought, arg
Read more