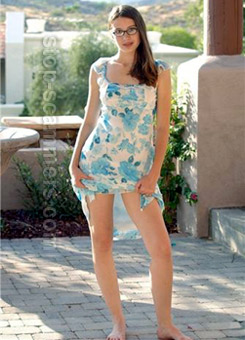 REPORT N1 (added on November, 27, 2008)
Lindsay (New Zealand)
Joyce didn't seem right from the start. Her (his?) first letter (8th Nov 2008) was long seemed standardised and ignored my first response that I was talking to someone else. Her subsequent letter got shorter and shorter when she found I was not a good prospect.
I continued chatting but made it clear that scam attempts had been made on me before, her response was it was a sin against God, but reassured me she was straight.She never answered personal questions. She wanted to msn but she would not answer when I suggested webcam.Her story had inconsistencies and didnt match her Match profile e.g.profile read blonde hair her pics showed brown and her first letter to me said black!She said they were only small errors.Her height and age and occupation was also different.Her profile said she was in France but her letter told me she was in Ghana.I pinged her computer which told me she was in Accra.Because I told her that I was not a rich man ,just normal and that previous scammers had not got away with any money but her to bear with my caution, she soon dumped me claiming that I did not believe her! I used your site but she was not featured, but when I used your letter search, I found duplications of letters by Karina Mayuhora, and Olga Kovaenko(Helena).I can send you these samples.
REPORT N2 (added on December, 12, 2008)
Lindsay (New Zealand)
Dear Team,
Thank you for actioning my request on Joyce Ofori.
Please can you look at another profile, pndc111, (Mexico) on Match who winked at me a couple of days ago. She has not yet answered or given me her personal email, but this person is using the same photos as the scammer Joyce Ofori ( thegirl75) ( Ghana) that I first alerted you to, and is listed on your site. Either this is the same scammer that has accidentally contacted me again or it is a new scammer using stolen photos.
The profile for pndc111 is still active on Match and if you view her picture, you will see it is the same person as in the photos listed on Stop-Scammers.com under Joyce Ofori. I can attach her new photo and profile, which matches those that were sent to me by Joyce Ofori.
Thanks so much!
Got to keep ahead of these guys...

Romance scam letter(s) from Joyce Ofori to Lindsay (New Zealand)
Hello New Friend
How fine was for me to open my mail-box and to see that you have replied me. Really marvelous!!! Of course I have some knowledge in computers, but not its' not great.That's why I was so surprised to realize that you found time to answer me. For me it's so interesting that I have an opportunity to communicate with you, though you are so faraway from me. Nowadays we really have lot possibilities to talk to each other. Yes, I think it's wonderful, don't you think so? Really, the distance becomes less and it's possible to know each other better. I hope that you'll like our communication and we'll be able to tell a lot of things about ourselves,I hope you do not mind?Well, what I can tell you about myself? I am a simple girl, but a very cheerful and open-minded one,honest,faithful and also have a good sense of humor too. I was told many times that I am the soul of the shop where I work because I have a great sense of humor and I can talk on a
Read more