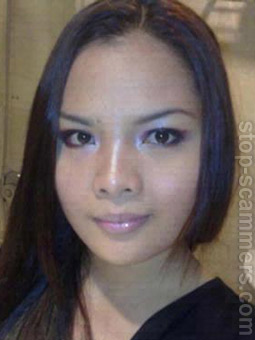 REPORT N1 (added on December, 10, 2008)
Andrew (USA)
(It is important to note that she has traveled to Oklahoma and uses that understanding of how the entire process works to leave her country. She bases that knowlege and integrates all aspects of it in her scam process).

We spoke on the internet first. She IM'd me while I was surfing in mfb.com. we went to cam right away adn then she moved us extrmely fast out of MFB and went for the Yahoo IM venue. She sent me plenty of pics and went for the "I want to get out of here" line. She said if I helped her finacially she would show me all the documents to prove she was getting things done for me. She asked for the money to renew her passport first. Then she wanted money for the 2 to 3 weeks it would take her to stay in Manila. She said her Consul at the emabssy would speed things up. After the first week she produced the passport. Then she wanted money for the plane ticket. She danced her way around me personally buying the plane fare myself. I told her I was exetremely uncomfortable sending her that kind of money. She invoked the "trust" and "God fearing" factor to get the money. She then produced a plane ticket (See Photo of it) then she said she needed money for the medical that is required to leave her country. Then she produced her Visa. (See Pciture) Now comes the big one. She then told me I needed to send her 6,000.00 thousand dollars more so she can prove to her coucil and the Embassy that she can provide for herself while here in America. I tiold her no way. She said OK send me 4,000.00. I told her No way, then she bargained it down to just 2,000.00. I laughed at her. She then went down to 500.00. I told her no way. She is extremely persistent. So I agreed to send her another 400.00 of my "fools dollars." I just had to see her play this thing out to it's natural conclusion.

After she produced her passport, I began doing research and discovered that her passport is bogus. I mean it is a Philppine passport but they stopped issueing them in June of 08. The new MRP Passports are Maroon and is used as of June 2, 2008, that is the type of passport being delivered now. Hers was the old green style but dated correctly but originate in November 2008. She also said she got her docs directly from the Embassy. Red flags went up again. They must be delivered to your address or work by Delbros. I questioned her on this and she danced around it. I then called Air Philppines to verify her reservation for the date on the ticket she supposedly purchased through a travel agent. And guess what...of course there is no record of the reservation. So the ticket she produced is bogus! I then called the Embassy to see if the Consular existed. Of course their is no record of employment for the Consular she said she is dealing with. I also discovered through an embassy official that you must have a Visa before you can buy a plane ticket out of the Philippines. She did this backwards but it doesn' t matter because she got the money. I confronted her on all these issues but she swore it was all above board. I told her we would see on the date she was supposed to leave for the US.

She actually played out the whole charade by calling me at the various times and layovers the flight would have taken. She called me from Hong Kong and asked me to Western Union her money but that I needed to send it ti the Philipppines. I told her she was nuts and that I would only send her money where she actually was. She was so smooth she asked me to talk to the supposed Western Union Agent there. I couldn't belive she actually had a friend play that role. Then she supposedly called me from San Francisco. I asked her repeatedly for her flight numbers all through this time and prior to her supposed journey. She gave me a new airline "Cathay Pacific" instead of Air Philippines and flight cx-904 but would not divulge any connecting flight info. I questioned her about that and she said she changed airlines. Another sleezy move! She asked me again in San Fran for me to wire her money but demanded I send it to the Philippines. I told her I can't do that and I gave her firm instruction to call me from a telephone in Ohare Airport. She said she needed it by the time she got to Ohare. She supposedly called me from Chicago Ohare but the phone number was still emanating from overseas. She wanted to know if I wired the money to the Philippines. I told her to go find a phone with a yellow handset on it and to call me collect. I told her no way was I sending money. She got extrmely angry with me so the game ended right there. She yelled at me again and told me she was going back to the Philippines. I told her she is already there and that she never left the Philippines anyway.

I have not heard from her since and she has removed herself from MFB.com. She did get a substantial amount of money from me. My fault fro being so foolish and wanting to trust for antoehr chance at love and life! This was an expensive lesson learned.

The moral of this story is you can't by love and NEVER VIOLATE PROTOCOL designed to keep your hard earned money in your pocket instead of in the scammers pocket. They definately pray on peoples desire for romance and love and they have the nerve to use God as well. Don't send money to anybody unless they are family or freinds!

There are many letters and Im's like the following. She is defiantely an expert at getting you to forget about the "never send money" protocol. She is smooth as silk and very conniving.

Emails from Justina Cortez to Andrew (USA)
Love Brings Us

If I ever were blind, and day is dark
Love would guide me to your heart
It brings warmth between you and I
Shelters the storms, calms the skies.

Love brings our every dream to life
Taking us to such beautiful heights
A heart whispers, with each rhythm
Speaks of a love softly if you listen.

It goes beyond distance, So ever far
Brings the moon, to a night of stars
Reaches for everything so ever high
It brings the world to just you and I.

It's as if I've found the road to love
To your heart, My darling, My love
It's as if heaven and earth entwined
Bringing me a angel I can call mine

I feel the essence of love earlier
while we talking mI GIVE MY
HAND TO YOU AS UR WIFE
^ AS LOVER ,,UNTIL NOW I
REALLY CAN'T BElieve that
we will reach this point .

I believe few lines Time or Year,
Monthor week,,to measure to find
Your soulmate ..If ur Denstiny come
especially in Love ,, It will soon , so
now we meet for two Days , we same feeling
that we feel inside now ,

Sweetheart imso sorry if was late to emailed you today i already call my Brother and he know's everything about us , and he said that..This is my life ^ i know what is wrong and what is Write and if he feel or he can see that im HAPPY'' HE WILL BE HAPPY FOR ME OR FOR US !
This is my sweetheart and i willbe there to you soon okay here my infornmation