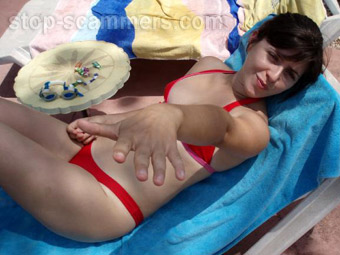 REPORT N1 (added on December, 23, 2008)
Wayne (Australia)
Claims she is bangladesh nationality, moved to cotonou with mum when was young, left to gods mercy, claims to work for some organisation to do with aids and handing out medication. She says she put cyprus not benin as country because she was there on an aids awareness thing and thats how she found out about the site.
I have paid a sum of money for her to come out, claims to get caught up at customs and needs a bribe to get out, she says she has not much money. No bank details given only use westen union.
This person also seems to work with a travel agent over there i think and also uses an interent cafe.

Good to read from you at the dating site, let me tell you a little about myself,am from British India(Bangladesh),don't know much about my father except from the story that my mother use to tell me about Him,not knowing if He is still alive or not Cu's my father left us at a very tender age ,telling my mother that He is going to search for greener pasture else where,and leaving both my mother and me to the mercy of God ,well we manage to survive through that period then when i was growing ,my mother then took me, we head to west Africa in search of my father Cu's that is where my mother told me that she hear He is living, doing business but on getting to west Africa(Republic of Benin)we could not locate Him ,the address we have about Him was not correct,nobody could tell us anything about Him,so we have to settle down there and it was really difficult for us then Cu's the country was still trying to develop,so mum have to do one or two things to make sure that we don,t die of hunger ,well to God be the Glory that we was able to survive life here,could not go back to Bangladesh anymore Cu's we have start another new life here and it hard going back there Cu's my mother like it here now and she have adopt their live styles and so don,t want to leave here anymore.

Am single, never married,have no kids and the only child of my parents cos after my mother gave birth to me.The doctor warn her not to have another baby for the sake
Read more