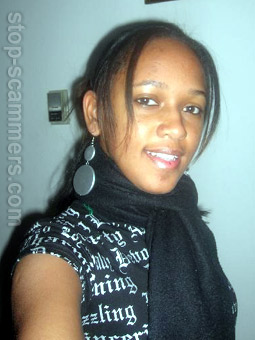 REPORT N1 (added on December, 26, 2008)
Abdul (United Kingdom)
Hello,
My name's Abdul and I live in the UK. I came across your site while I was checking a very suspicious letter I recieved from someone who claims to have come across my profile on hyves.net (I havent been to the hyves site in almost 4 years). It sounded abit suspicious because I had recieved a similar letter a few years back and after I replied the lady was telling me some sad story (made up) about har rich dead father and how he left some money for her and how she wants to transfer the money through an account...It was obviously a scammer so I stopped sending mails to her (or him or watever). I'm a Nigerian and I hate the fact that people judge all Nigerians based on the action of a few crackhead scammers, how would the Americans feel (for example) if everyone if the world accuses all americans of being like Maddock. Scammers dont care about borders, its a human thing and we should all watch out for them wherever we are.
Thanks alot for this site guys.
Cheers.

Romance scam letter(s) from Debora Maldaline to Abdul (United Kingdom)
My dearest
How are you today? i am very happy you responded to the email i sent to you in your address at the site. I am Miss Maldaline debora Yahaya a 24 years girl ft5.7. wt 59 i am the only daughter of Late Dr. Fidelis Yahaya from Ivory Coast in west Africa, who died during the war in my country last two years (2006). My father was the personal adviser to our former head of state ( LATE GEN ROBERT GUEI)

he is the owner of Yahaya Cocoa industry (LTD) before he was assasinated alongside with my mother on a cold blood one morning.But i managed to escape for my dear life and ran into a neighbouring country,(Dakar) the capital of (Senegal) and i am reciding here now as a refugee. Meanwhile,I am writting to you now in a Revrend's computer and will like to know you the more before we move forward from here!.

I will like to know what you do for a living,remember that you caught my attention in that site that was why i wrote you at the first time.
Read more