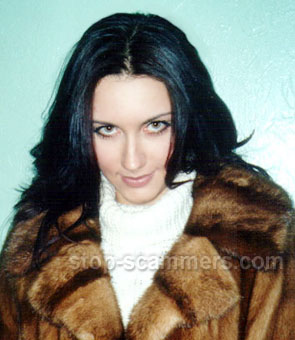 REPORT N1
Tom (USA)
I contacted you because someone is trying the Russian bride thing on me right now. The reason I know is because I found the same series of letters to a guy named Ed on your website. His scammer was Julia but mine calls herself Ekaterina. A Julia@sadko.net tried to contact me from Webdate a while back and I think it's the same person. Anyway I'm trying to get more particulars from this "Ekaterina" such as full name, address.
REPORT N2
Michael (USA)
Same letters as Tom W. almost word for word after 2 months she is in love with me and wants to come to U.S and she needs $380 for the rest of the plane ticket. She sent me all the same photos that you have on your site. Also an address to a bank where I can send money, in her last email she also sent me a scanned picture of her visa, which was issued Aug 23 2004.
REPORT N3
Mark (USA)
Contacted me with several letters over a 3 month period. Gained my trust then asked for money for plane ticket. She said she had pawned her mothers jewelry but came up short. Needed 390 dollars to purchase ticket.

Emails from Ekaterina Yureva to Tom (USA)
Hi Tom!
How your day? I hope you are glad to receive my letter because when I have received your letter I really was delighted. Many thanks.You are the first person I have had correspondence. For I have never done the correspondence before.
I must admit that this is quite a pleasant surprise I am very glad that I have chosen you from all the others who was at the site webdate. I had no a lot of time to look all profiles on a site. I have chosen the first profile which has liked me. Probably my hand was directed with success. It was experiment. I was not confident, in anything. I have caught fortune for its tail. Smile!!! you must think about why I send email to a man half way around the world from me? I thought I should explain? I am really tired of the way most Russian men think and act. There are some who are okay but it seems that the majority of them have a real bad attitude. It seems especially previlent in the Magadan I live in. Magadan it basically consist from a prison for criminals and gangsters. Here bring all convicts, from all country. I am looking for a man from USA because I believe that you would have a better value system than the mans in the Magadan. I do not have a problem in meeting mans at all, just it is hard to find the "right man". Also I have written to you because I am admired with America.
I would like to know more about this Country and about its people. Also I want to study the English language better. I study the English lan
Read more