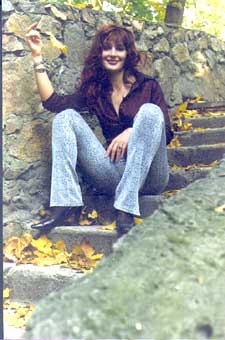 REPORT N1
Michael (Canada)
I am glad I found this website before I was scammed. Knowing that if something is too good to be true, then it usually is, I was suspicious when I started getting e-mails from a gorgeous Russian girl named Kristyna. She claimed to have the Friendfinder.com handle name of lgacher2002. However, when I looked up that profile, it listed her age both as 24 and 26, but in his first e-mail she claimed to be 30.
REPORT N2
Don (USA)
This lady sent me the first letter of contact. She initally wrote one letter every two days. After a week she claimed great love for me and could not live without me. During the process of approximately the first month, she sent me the photos that are on here and more. I sent her a letter requesting that I speak with her on the telephone at my cost. The letters ceased for three weeks. When she finally replied she said that she was offended that I "did not trust" her because I wanted to speak with her and claimed to be insulted. She then wrote about one letter a week for the next three months and after requesting money during this time, she completely stopped writing. Out of curiosity I found her on another scam reporting site and she uses three different names with the same photos.

Emails from Kristina Kostomarova to Michael (Canada)
I am very pleased so soon to receive from you the letter. I would like to receive new photos from you. To me very much to similar, that you to understand mine not so good English language Language. I want to speak, which I have learned(found out) (has found out) it > at school, and behind of it in College. I have growth of 170 centimeters and weight 57 kg, I have Formation (formation)((education)) the dentist, I live in city Cheboksari. It to - approximately in 900 kilometers from cities Moscow. I want to speak you, that I very much love children. I possessed experience > dialogue in me directly in Russia with the people. But they were not adjusted (are adapted) are adapted), is serious, also we have run into debt a Part. And they very much frequently to drink alcohol and in a set, and It not so are pleasant to me. I think, that in you - not a a gift (gift) ((present)) such habit. I want to inform, that I do not smoke, and I do not drink > strong spirits drinks of alcohol (mood) spirit. But sometimes I love to drink in the good company not a lot of grape eicu of a grapes, though it happens very seldom. I want to speak, which I am capable well, that studied 6 years. I Want to inform, that I live with my mum. I have no the Father,, the grandfather Unfortunately has died, 2 years back. I want to you to, speak, which I love Various music, but basically classical. I want to have the serious attitudes(relations) (attitude(relation)) with you to find wi
Read more