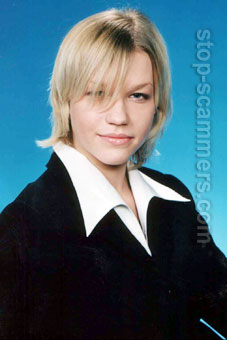 REPORT N1
Glory (USA)
This person contacted me on othersingles with the screenname Julia_78. The profile of the Julia_78 claimed she was from L.A. but she spelled it Los Angeled. As soon as I replied she urged me to email her at "julialukina@land.ru," saying her name was Julia Lukina from Riga, Latvia.
She made more than a few mistakes initially in her emails. She mentioned estonia several times when she originally said she was from Latvia. She cut and pasted a previous segment of email describing her figure into a later email. She also ended her sixth email saying "yours Tamara." Of course did any of this bother me too much? Well apparently not because I was too bowled over by the pictures "she" sent of herself, all of which don't look like the same woman. I am embarrassed at how naive I was to have fallen for a scammer. Alarm bells finally went off when Julia Lukina said she would give up her entire life to be with me and she would need $400 for a visa. This was all described with out any specifics, she simply asked for $400 for a visa. After looking on various russian scam sites I used the scam letters search to find that the letters I was sent were almost exact copies of emails sent by one Ekaterina Belyh to other men.
The letters sent to me had some variations on the form letters sent to others. I am sure this scammer is scamming many other men currently because she got her stories crossed as she was writing me.
REPORT N2
Tommy (USA)
I was not looking for a girl from another country. This girl from Latvia contacted me on www.othersingles.com. I had suspected that it was a scam after the first 3 e-mails but decided to play along anyway.
REPORT N3
JT (USA)
Yet to try to scam, but a cut and paste from Ekaterina Belyh to Roddy Miller most of the time. Last e-mail did not do to well in the find/replace because she/he/it used the wrong country and signature. Also, mailing address was in Estonia, fromt he previous Message which is a nice distance from Riga, Latvia.

Emails from Ekaterina Lukina to Glory (USA)
Hi, Glory! First of all want to apologize before you, that has not written to you at once. Communication with a person from other country gets me interested in. I would like to tell you about me in detail. I should love you to get to know about my enthusiasm and the things I have a fancy for as a whole. I live in Latvia in city of Riga. This city is located on border with Russia. Therefore in our city a lot of Russian. On a nationality I too Russian. My parents have moved to this city distribution to work after the termination of university in 1980. After the USSR has broken up our family appeared abroad. So we also live in Latvia. I have finished Russian school and institute in city of Tallin. Now I work in the city of Riga. I start off with my hobby and keenness on music. I am eager to listen to foreign and Russian singers. As for Russian ones I prefer Alsou, Arion, Kirkorov and Tattoo. Have you ever heard of these Russian stars? As for foreign variety performers I love Scorpions, Bon Jovi, Eminem, Michael Jacson, Natalia Oreiro and etc. By and large I am fond of listening to classic and modern style music. I want to learn which music do you like? When I was a child I was in studying music in musical school for 6 years. I played the piano. Then I attended lectures in musical high school where I contested many musical festivals. Now I often sing in karaoke and always get highest points. Tomorrow I will try to have a short song recorded to send to you. (Mi
Read more

Emails from Ekaterina Lukina to Tommy (USA)
Hi, my most dear friend Jusen!!!
I am very glad to your letter. It means, I am interesting to you. Me it very much has encouraged and has pleased. A thank to you for it.Today my working day was gave out difficult and little bit sad. I work as the lawyer in small firm.
Business that my chief to me was unfair. Has shouted at me, though I was in anything is not guilty. Mood mine negative. When all situation has cleared up, it has not apologized at all before me. Such situations are not seldom. But let's not be about it, you see I have man, to which I can all tell, and this man - you. Our correspondence I have more and it is pleasant more. I feel, that you the really good close and sensitive friend. You can understand me. And it is very important in our life, believe me. The trust, understanding, keenness is just that is necessary for the people, is especial now. We live in the world of complete indifference and lie. I, for example, despise the false men, and I consider, that they need to be deleted from the dialogue. I have girlfriend and its former boyfriend constantly deceived her. Spoke, that loves her, and itself only of saws in bars, changed with the prostitutes, lied on trivialities, periodically did not spend the night at home, she constantly pulled out it from unpleasant situations, it constantly asked it money to alcoholic drinks, even sometimes to beat her. All this is familiar to me not by hearsay, how many time I calmed her, supported difficult
Read more