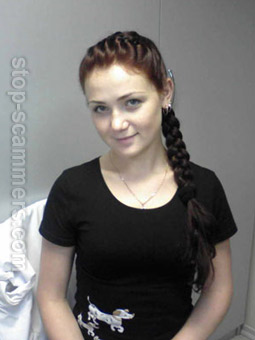 REPORT N1 (added on February, 24, 2009)
Guy (Australia)
Elena played the game very well. we had the usual conversations for a few weeks until we decided to meet. she did not want me to visit her because she lived with her parents, so she decided to visit me. initially she told me she would paying for herself to come, but then the funds appeared to dry up. she then started sending emails requesting 920 euro and send it by western union to a sergey cherepanov who was her agent. after i told her that i could not send it via the agent she requested that i send it online. this is were i become suspicious. in the end i told her that i would not be sending any money via western union so she tried to get me to send it to a credit card number. when i told her i was not sending her any money she wanted to no why, i sent her an explanation explaining why i thought she was scamming me, i have not heard from her since. the last time i saw her was about a week ago when she reappeared on russian euro under another name, it was at this point i submitted a abuse report to russian euro.

Emails from Elena Nikolaeva to Guy (Australia)
Uuufff... little tired... Weather remarkable today in our city. I just came back from agency to write to you some news. I shall try to tell most clearly about all and to forget`t nothing))) I have informed the agent the information which you have written to me. Then we together planned the plan of my visiting, your beautiful country. In my city there is no international airport, therefore I will have a necessity to go to Moscow that already from there to fly to you. For agency was made inquiry in embassy, therefore my visa already have started to prepare, and as my passport for travel abroad. Also the agent has counted up a total cost of the second part. It is necessary for me to pay 1170 euro, expenses enter into this cost: on air tickets, together with all gathering the airports, taxes., travel up to Moscow and stay there some time, before my flight., the insurance., registration of all necessary documents and others. Yesterday I cared about pay for registration of the passport and the visa both other documents and services, I have paid 350. I have in the purse nevertheless 250 euro, but it is not enough of it. I require in 920. You have told, that we can find the decision. I can, is possible hope for your help in this problem? Because I cannot find other decisions. I do everything, that in my forces. I was interested in agency as you can care of payment. The agent has explained to me, that basically they accept means from persons with whom at
Read more