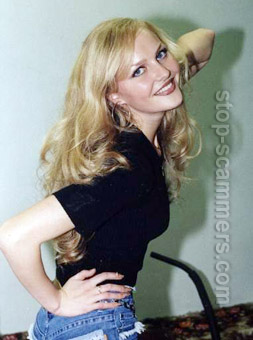 REPORT N1
Lino (Italy)
She write me she does not have telephone, so I sent 100 dollar fo a mobile telephone. I went to lugansk to meet her, but she vanished into nothing. Her telephone was mut. I stayed in her town 13 days waiting for her, I went to her address, but her neighbour showed me photos of another Oksana Kudryavtseva, married in italy, with sond. Later, she wrote again to me explaining that she did not want to meet me because "I was writing also to another woman and she was very disappointed". This was true at hte beginning but after I stopped to write to the other woman (another scammer) and I went to lugansk only for her. Bad mistake.
Created: 2004-09-14    Last updated: 2006-09-20    Views: 1005