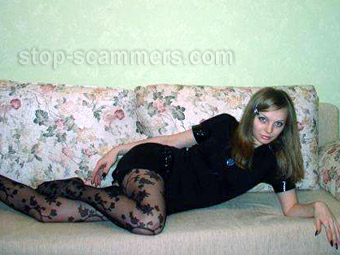 REPORT N1 (added on April, 29, 2009)
Nathan (USA)
Maintained contact for 2 weeks before saying she had a vacation and wanted to visit me. Said she had gotten her visa ok'd but she had to get her plane ticket before getting it. She said she had bought the ticket to come over here but could not get her visa unless she payed for a ticket to return to russia. She needed $600 dollars to get the other ticket. I wouldn't give her the money and I haven't heard from her since. I told her I had seen her on a sight about scammers and she tried to tell me that her ex boyfriend was a computer genious and he was the one who put her on it.