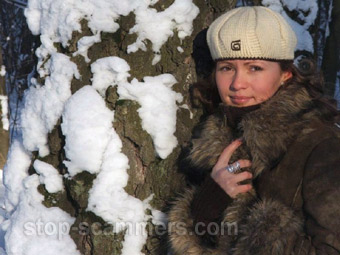 REPORT N1 (added on June, 11, 2009)
Petur (Denmark)
Got 10 letter and after that she wanten to wisit me and told at story about big loan in a flat so see needed money, to travel I have not send her money but now see is trying to get money by telling you a story that her father is very hard injurd in car craz od he will die if she not will get 40000 rubler and she is not getting any money from me and she have got new photo of her sself.

Emails from Elena Orlova to Petur (Denmark)
My dear Petur, I am sorry for such a long delay of my letter. But the consequences did not let me do it! Two days ago, late at night I was informed that my father got into a car crush and with hard injuries was taken into the emergency unit of the hospital. After I was informed I went to the hospital, but I was not let into the unit, because there is a very serious operation and asked me to come in the morning. My mother and I all the night spent in the reception, waiting for any news from the operation room. I do not remember how long time spent, many doctors passed me by, but all of them were saying that the surgens are doing their best and we needed to wait. When one doctor called our last name and asked if there are with such last name, my mother and me with the tears in our eyes run to the doctor with the hope to get at least some news. The doctor said that the injures, my father sustained are really hard, with a piece of the cars body he was pierced in the left part of his body, breaking 2 ribs and like a knife cut his left kidney, damaging the ******. The surgeons did their best and literaly piece by piece reconstructed the ******. But they were left with the major problem - cut left kidney, deteriorated by the huge loss of blood. The doctor told us that my father was taken to the emergency unit and connected to the kidneys life support machine. But maximum my father can last under this machine is one week. Urgent transplant of the kidney
Read more