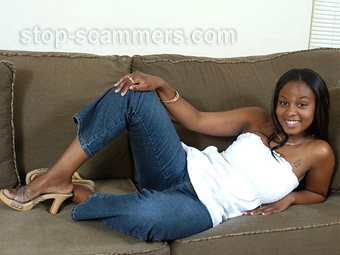 REPORT N1 (added on July, 7, 2009)
Robert (USA)
She has now added a new email address dania_good2@hotmail.com on My Space she is claiming to live in Queens, New York and is using the name Dania Mohammed. On My Space she is back to the name Mariama. She told me that the only time she has ever left Ghana was to go to Canada on a business trip with her father. The pictures of Kelsey are of a girl that was raised in Bristal, California, and who went to school at North Idaho College. The saga between me and Mariam is still on going since the police in Accra have asked me to stay in touch with her and to attempt to monitor her activity. They are preparing a trap for her and hopefully will be able to arrest her.

Emails from Jessica Michael to Robert (USA)
Hi Bob,
About 3;00pm yesterday, I had a call from Fedex informing me that Mariam called them and that she is on her way to Fedex to collect the package. I also went there with other colleagues of mine. We were able to arrest Mariam and one other guy by name Abdul Rahman. The lady we arrested happened to have her real name as Mariam Kassim but not the one you thought she is. She confessed to us that the one behind all this scam is by name Kwame Atta. Abdul Rahman then led us to the house of Kwame Atta. We managed to arrest Kwame Atta who has been posing as Mariam Kassim all this while. He told us that the reason why he used the name Mariam Kassim was because a friend advised him to use a name that in case he succeded in collecting money from you he could get someone with the same name to collect the money, that was why he used her friend Mariam Kassim's name and that he has been scamming you alone. Kwame Atta has his full name as Ebenezer Kwame Attah Dadzie, he claims to be 18yrs old. he confessed having collected an amount of usd$11,000.00 and also claims to have spent all, but I dont believe it. He confessed that he changes his voice to that of a female anytime you called. He again confessed having spoken to you as Tanko, Mariam's uncle and the doctor at Korle Bu Teaching Hospital. He also said that all that he told about the immigration, the visa and the accident were all lies. Ebenezer Kwame Atta Dadzie(Mariam kassim), Mariam Kassim and Abdul
Read more