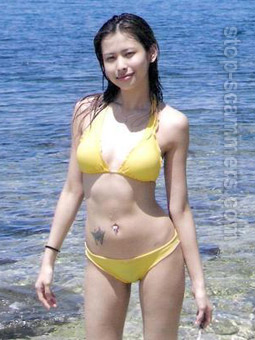 REPORT N1 (added on September, 25, 2009)
Charles (UK)
A young fillipino, called Maureen, Maui, or Sammie - she changed her name three times during our correspondence - asked me to chat to her using Yahoo messenger, which I did.
Things went ewell for twenty minutes or so and then my heart sank as she asked me the killer question - was I generous. So I said yes. So she said was I generous enough to pay a year's schooling for her. So, I said, sure if I'm sure we're in a relationship, I'll do that.
Then a bizzare thing happened. Someone else turned up wanting to talk to me. I accepted the request and the person - called Bianca - asked if I remembered her. So I said 'no', she then said 'are you busy talking to someone else', I said yes, but it would be over in a minute because I was talking to a girl trying to scam me and was about to terminate the chat session. Then all **** was let loos as both women began hurling abuse at me for failing the 'trust test'. Apparently, if I'd trusted Sammi, I wouldn't have called her a scammer, I'd have agreed to give her the money! I deleted both their profiles from my contact list but they kept popping up again! Sammi kept protesting her innocence saying she wasn't a scammer because she hadn't asked me for any money, except in a test! I suggested that becasue I didn't know it was a test, it was a real question.
Anyway, to cut a long story short, it all ended in tears! When I went to Russianpersonals to report her, she'd already deleted her own profile.

first and foremost...
my real name is sammie largo..and maui is just my nickname.why maui?its a long long long story..hhehhee....i have to change a new email add.because theres a lot of rude people are emailing me.i have chatted to a lot of guys on the internet.but they are not serious.they dont want a true love.they just want a pleassure and fun...it is really dissapointing charles becos i am not here for that..i am here to find my lifetime partner..i have a dream to follow and dreams to be fullfiled and that is to marry a foriegn man abroad and have a happy family..but i guess it will remain as a dream and it will not happen...goshhh so so sad..well enough of it about my work..being a waitress is not so eassy....my salarry is enough for the bills for the rent of the house,electric and water bills and for our foods,...my mother is a vegestable vendor at the market.she help sometimes too.i dont have a father.he left us and go to his mistress.he is not a good father to me and a husband to my mother.he always hurts us when we dont have a money to give for him....i am glad that his gone now..and me and my mother is happy and helping each other.
i am looking for someone who can love me and accept me for what i am..and what i have in life....sometimes foriegner judge filipina that they are after money.that is wrong..yes as we all know money is a way to survive...but they dont know that even if we have lots of money.nice cars,big hou
Read more