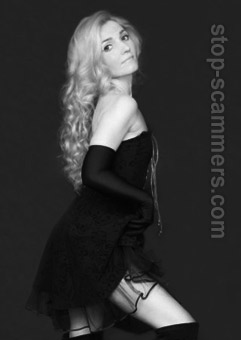 REPORT N1 (added on October, 20, 2009)
Mark (UK)
She says her mother died of cancer she works in a school she only has internet cafe access to the web, she sends pictures of profesional quality of her work holiday and childhood. she has long blond hair and a slender figure.
REPORT N2 (added on January, 28, 2010)
Bruce (United Kingdom)
Oksana appeared on the Freedating website then dissappeared within a couple of hours however she had messaged me and left me a personal e-mail I contacted her and she gave me a story she didn't know how her profile was deleted but we struck up conversation, told me Mum had died of Cancer 10 years before live with Daddy, wanted to get out of Kazan as it is a bad place to live. She wanted to come and visit me as her feelings are getting very strong told daddy wants to leave been to the travel agency would require ?350 to apply for a visa but has no money could I help. Warning bells started ringing as she told me she had no phone, my friend worked on a Russian pipeline for years everybody in Russia has a phone they have phones before they have food, but I kept it going told her if she is desperate to come here ask friends and family for a loan and I would pay them back when she arrived, they have no money I eventually got her full name and address off her and did a search and her I am, lucky not really as I wouldn't have sent the money anyway but guys watch out it can be tempting.

Emails from Oksana Parasyukova to Bruce (United Kingdom)
Hello Bruce!!!!!
I am glad that you to answer me. I do not know why my profile has been removed, but I am very glad to see your answer. Thanks that you have decided to answer me, I mean knowingly to disturb you. I the first time here on the Internet to have acquaintance, and I hope that all at us to turn out, and we become good friends and can and more than only friends. What you to think???
I do not know as to begin it. I will begin with the most simple. My name is Oksana, me of 30 years. I was born on November, 25th, 1979 in Russia in city Kazan. I not when was not married, and had no children. But I very much love children, and always wished to become mum. I had in the past some relations with men, but not that it was impossible. Last relations were one year ago. I thought that have found the man of the dream and have been enamoured in it without mind.
We even began to live together, we have lived 3 years, and I already thought that it is which that man I so a long time searched. But I very strongly was mistaken, it has appeared the rascal. It began to change to me with other women and when I to learn it to me was very very sick. I not to wish to lift now memoirs on it now. The whole year I had no relations with men, did not try to get acquainted at all. I to see transfer on TV about happy women which get acquainted on the Internet, and all of them leave then, such happy. I as to want happiness in the life, and have decided as to try it.
Read more