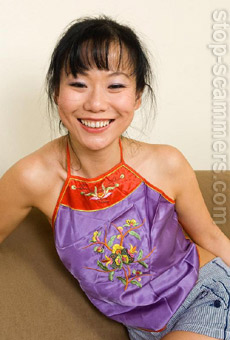 REPORT N1 (added on December, 1, 2009)
Ron (USA)
1st contact the above web site using the screen name (sweetlover66).
She was totally in love with me by the second letter. I told her what she wanted to here to get as much infomation about her as I could.
claims to be an american citzen taken to Ghana by her mother when she was a child. Her mother was transfered to Ghana from the USA, to do missionary work. Now that she is out of college and on her own. She wants to fine the man of her dreams and come back to the USA. Her Scam:
Her american passport has expired and it cost $380 dollars to get it renewed.
I told her she had to go to an American Ambassy to get it renewed and it only cost $45 dollars. Never heard from her again.
REPORT N2 (added on January, 15, 2010)
Al (USA)
The story starts with contact on asainpeoplemeet.
People meet, I reported her to the site, so she no longer operates under this name asianbaby50. site reports her as in Ohio, after getting aquainted, she confesses she is in accra ghana. says she want's out of ghana has a plane ticket only needs a passport renewed and a medical certificate. Oh by the way my dad was a miner in the gold mines and i have 36lbs of gold. then lawyers get involved, to get proper paper work, it costs mpore and more money to get permits. Then she gets arrested and sick in jail, need money to get her out of jail and for doctors. then riendorf takes gold out of ghana to england, his visa expired and need more money to send to USA. after a few grand, the gold is in usa, but problems occur, need money to pay to deliver to house, deliverer insists on money incase problems occur. and now there is 500 lbs of gold, and gold was too heavy to and truch shocks gave way, driver wants money to fix shocks. the person accompaning gold, ellen jones, won't deliver, she has spent money and won't deliver 'till she's paid, after she gets paid, she still won't deliver. mean time sasu reports her 36 pounds has been returned to her. and she has all the paperwork to come to america, and has a plane ticket, just need updated medical cert and new paperwork for shipment of some gold on aircraft, where boateng comes in, he's a shipping agent and will take care of paperwork, more money. She then boards the plane and gets to amsterdam, some paperwork is no good, send money to boateng and he'll take care of it. paperwork is fixed, she boards an airplane bound for america, 5 hours later she is in California, no plane has the capabilities to go from Amsterdam to Ca in 5 hours. John bill then reports boateng has Kidnapped Gloria, stole her phone and computer in an effort to steal her gold. now she has been taken far from accra, john bill wants money to go rescue her, and he has money to send me but needs a smaller amount to get it sent. They will bleed u dry, gold can be sold in Ghana, watch for these names, they are all players in the scam.

Romance scam letter(s) from Gloria Sasu to Ron (USA)
I an in Ghana currently, my dad died in a gold meaing in Ghana and my mom have always been taking care of me but i can do that on my own now. I mom took me to Ghana when she was transfer to Ghana in her missionary work to Ghana. that's what leas me to Ghana and i use the influcnce to get my accounting in Ghana. I have finished my college when i was 26 yrs. My mom had moved to Holland due to anotherretransfer, but i am still in Ghana. I am currently working as a employee and they sell blenders, cooling in tensiles. I love my job so much because it's base on commission payment and it gives me time for there things, though i don't earn much but i always have a lot of free time. I do come to the state more often and the last time i came to the state was last yr january and i spend 3 weeks in cypress motel, winter haven, that was my last trip out of Ghana and place i have visited in my like are: auburn in NY, bradford in texas, mocksville in NC, granvills in Ge
Read more