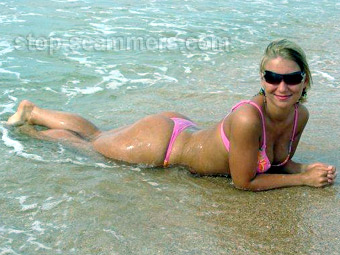 REPORT N1 (added on December, 30, 2009)
Gene (USA)
She told me she was an actress.
She phoned me a couple of times.
On the phone she acted as if she was being coached or she was unsure of which one of her men I was.
I referred to details in our letters and she was confused and stalled a lot.
I told her I wanted to send her flowers and needed a phone number for the florist, but she did not comply.
She fell in love quickly and talked about a meeting.
I became suspicious because she said she a gone to Turkey on vacation and sent me **** photos on the beach.
Even though she had taken the vacation during the time we were corresponding, she never mentioned she was leaving on vacation.
Also, she gave me the impression she was a poor woman.
I asked her how she afforded the trip, but she did not respond.
She sent me the same letter twice, but the second time she included another man's (

My name is Ekaterina. You to me have left the a site of acquaintances: russianeuro..
I could not answer you earlier as have been occupied by work but now I have a free minute and I have decided to write to you. I search for serious relations and the present love.
I will tell to you more about myself in the following letter as I already spoke to you that I am occupied by work. I hope that soon I will receive from you the answer.
As I send you some photos.
Your Ekaterina!

Hello my friend Gene !
I am very glad that you have written to me back.
I would like to correspond with you.
And now it is a little about me,
My name is Ekaterina , I live in small city which refer to as Kugesi .
To me of 27 years.
I of 166 sm of growth and my weight of 53 kg.
I went to school, after school I have arrived in theatrical school.
I very strongly love the work. Very much to like me beautiful dresses which I put on representation.
I very much love art.
As I like to go to theatre and to see performances.
I prefer to listen to music on mood. I can listen in the evening to classical music and in the morning
I can include radio and hop while I prepare for breakfast.
I have no harmful habits, I do not smoke and never used any narcotic substances.
It happens that I can drink easy alcoholic drinks, but it happens only during holidays and
in the company of my girlfriends.
I never was married
Read more