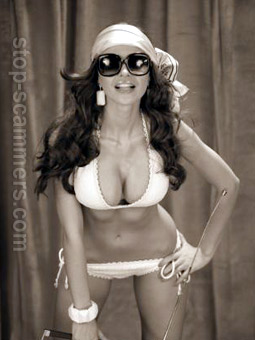 REPORT N1 (added on January, 22, 2010)
Anthony (England)
I communicated with Inna for 3 1/2 months from end september 2009 to 18th. Jan 2010. Have paid her ?470 total directly through moneygram, first payment of ?310 being for passport/police report. Immediately she got money, she opened 2 new webpages on above dating sites. I did not say anything for a week or so - she was logging on every day. I told her and she deleted them, initially denying she had used them. Lots of emails from her- virtually every day for over 14 weeks......
I have lost about ?550 altogether.
I discovered only recently that she was purporting the be in Rubezhnoe, Ukraine whilst actually emailing from the U.K (I.S.P. host in Gloucester) and later apparently from 2 cruise vessels (satellite) and then most recently from Andorra.
I helped her a lot to apply for the passport and then the visa. She did not tell me when she had an appointment in Kiev for U.K. Visa Interview - probably early December, 2009.
Loads of emails from her over the 3 1/2 months saying how she could''nt wait to be with me....
On 8th. Jan. She tells me she has an appointment on the 18th. Jan. as the date for U.K. Visa Interview and requests funds..... I then booked a return flight to Kiev from Lugansk, plus Hotel.....?231 total & sent her a ?160 moneygram.
She told me she was in a hotel near Lugansk airport.
I had to cancel the bookings and suffer losses - as she did not attend the outward flight. I checked the last email header and found that she was in Andorra!!...this is why she missed the flight in Lugansk! I have also found that she was apparently in Kiev on the 8th. December, 2009 & probably for a few days earlier - I assume this was the to attend the real visa appointment and collect the visa. She then went home and back again to Kiev, flying on the 15th or 16th.
December to the U.K. During this period she presumably stayed at a mans house in the south west area of England - IP address traced to www.fasthosts.co.uk : Gloucester. I checked many other emails and found that she spent several days on a cruise ship, returned home, on another cruise ship for 8 days...then last emails from Andorra. Worst thing is that she let me book the flights and hotel and never said anything. She had the cheek to send me another email on the 18th. Jan.... detailing how the non existent Visa interview went...then hinting that she will need to go back to collect it in another week (more money needed)!! This was also sent from Andorra....1,800 miles from where she said she was Kiev.....
I believe that Inna Veroznaya may also have conned other men out of money and this would require further investigation (email address) and co-operation with the Ukraine Police. The Police in the U.K. have been informed and investigations are starting.

Emails from Inna Veroznaya to Anthony (England)
Hi, Anthony!!!
How are you?
I wish you good day!
Thank you for link. I see that it is very nice please!!!
What is the weather over there? Here we have cloudy sky and rain. I don’t see any sun ray. I am free now and how I want to feel somebody’s warm next to my. I dream of seating together by fireplace and dreaming of our future. I want to give him everything I can give.
I work in the government school. I like children very much and I hope that soon I will meet somebody and we can have our ones, which well combine parts of me and my husband in them. You know all my day I spend with children. They give me power to make smth good in this life. Our .life is so cruel and hard, but when I see child’s smile and if I know that this child likes me nothing can be better for me than child’s love. Cause children the most sincere creatures in this word.
They are pure and aren’t spoiled. And they have a strong influence on everybody. After communication with children people feel that they are useful for this word, I see.
Usually I have problem with children behavior during my classes. They can even make me angry, but I calm down quickly. Moreover such children who have problems during classes are the most interesting to associate with. Because they are more open and they don’t afraid of telling you smth, which you maybe afraid to admit by yourself.
Tell me please how your days going?
My starts with morning running if it is good weather, than I do som
Read more