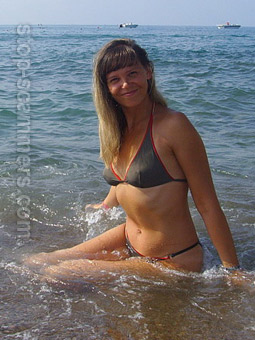 REPORT N1 (added on February, 10, 2010)
Bylle (USA)
Anna Vedernikova convinced me she loved and wanted to marry me!!! She never asked for any money until the 51st letter, and asked for $600 US dollars. I sent it plus $150 equalling $750 US dollars. One week later, she asked for $3200 US dollars, because the Russian government told her she needed to show them $3200 to prove she had enough money to live in the USA for her U.S. tourist visa, plus $70 for registration fees (= $3270 dollars total). I didn't pay the $3270, and the next week, she asked for $600 so she could go home and pay her hotel bill in Moscow. I didn't pay this. Since then, Anna Vedernikova has stopped writing to me. She talked to me three or four times on the phone, claiming to be in Moscow, but I believe she never left Yoshkar-Ola, and this was the voice of an old woman and not a young one, like in the photos I had received.

Romance scam letter(s) from Anna Vedernikova to Bylle (USA)
Hello Bylle!
I have been very occupied and could not write to you earlier. Now I have time. Bylle, I am never had still dating through the Internet. I think that very interestingly when two people have dating by I-net, I ` m not sure that I attached my pic am correct. I ` m very bad the nobility how to use a computer and consequently I hope that correctly attached my pic. I ` ld want to know about yourself more, but if you have any pics, please would send me them. I want to tell you about myself. My name is Anna, I am 30 years old, I live in the village Kilemary. I work as the nurse on care of patients. I love my work, and you Bylle? I live in small village where 3000 people live, I am realy from Russia, and I am sorry that my profile on the dating site said that I am from your country. It was my silly mistake, I at all do not know as so it has turned out, I searched for the country in the list and have not found but if it is possible, we could further talking so far. I hope that you like my photo, but I want that you also have found out my soul, for me the soul of the person is very important. I also wish to see your photos, it will be not difficult to you to send me them tomorrow? I hope that you can see my pic, I also will be glad to see yours pic. I am looking for a man who desires to live for living and love for love. I believe that those find the treasure who seek for it. I want him to be strong, caring and attentive. I want to feel that s
Read more