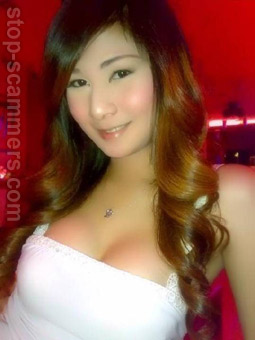 REPORT N1 (added on March, 17, 2010)
Randy (USA)
I agreed to help Carlene to get to US and I sent her $999.99 to get started. She said she quit her job to work full time on getting her passport and visa. She then emailed me a detailed report of where she spent the money. Within 3 days, she told me that the money was almost gone and needed more to travel to Zamboanga to get her passport. I sent her another $350.00. Once she got there with her friend, she said she didn't feel comfortable staying in the house with her friend’s family and wanted me to tell her it was ok to stay in a hotel. Sure. At this time, I hired a Private Investigator out of Manila to do an Identity check on her. After about one week, the investigator e-mailed me back and told me that they could find no-one in Philippines under her full name and birthday. Nothing on work records, birth records, voting records, nothing. I then called Carlene and told her what I had done and that she had better send me copies of her "new" passport, birth record that she said she had gotten copies of and any other identification she has and email them to me that day or this game went no further. At first it was, “You don’t trust me.” I told her that any trust I had was in a voice and a few pictures and I wasn’t spending any more money until she did exactly as I had told her with the copies of everything. She said she would and I hung up. I have received no further phone calls and/or e-mails from her since, as I expected..
Created: 2010-03-17    Last updated: 2010-03-17    Views: 760