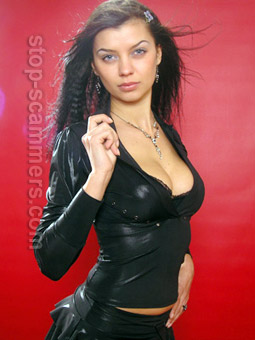 REPORT N1
Kim (Finland)
I wrote to this woman first through Anastasiaweb and I enclosed all my contact information for her, my mobile phone number and my home address. A few weeks later I received a very short sms from her and another few weeks later I received her first but short letter.
Then I received sms from her in which she asked me for money.
Here are copies of her sms:
Sent:
14:34:31
05-10-2004
PRIVET KIM KAK DELA?KIM MNE OCHEN NUZHNA POMOSH. ESLI MOZHESH POMOGI SKOLKO SMOZHESH MOEMU PAPE NUZHNA OPERACIYA U NAS NE HVATAET DENEG. POZHAYLUSTA.OTVET.CELUYU.
Sent:
15:37:22
05-10-2004
KIM MNE OCHEN NADO DENGI POMOGI SKOLKO MOZHESH.
Sent:
15:59:11
05-10-2004
TU MNE POMOZHESH S DENGAMI?TEBE NADO MOY ADRES?
This woman desperately speaks about money in her sms and I replied to her that of course,I'll help her(but of course,I really wouldn't send money to a woman I've only received one letter from and never saw her in person!). I was just playing along with her low game and she replied to me by thanking me for the help and saying that we'd talk later. Yeah, right, like I've heard anything from her after sending her some money.
I've dealed with scammers like her before and I know what to do with them.These women has to be stopped! I reported this to anastasiaweb.
where seems to be surprisingly many scammers. This was already my second time when I came face to face with one. Well, anyway, I hope that my report will stop this scammer!
P.S. Please, find enclosed additional information and a attached letter from this scammer Natalia Ryasichenko.
In this email the scammer tries to convince me that she's indeed not a scammer and she wants me to write this to Anastasiaweb that she's not a scammer so that she can have her profile active again and act like nothing ever happened.
REPORT N2 (added on August, 16, 2005)
Matthew (England)
This girl had her ad on euroloveliness from where I wrote to her first.
You could see from her letters that she is not a serious girl and only after four letters she was madly in love with me and wanted me to send her almost $400 so that she could come to me. This is the typical scammer pattern and I did not fall for it!By the way, her pics became more and more seductive and in her last letter she did send me some very intimate pics of her ****** and also, wrote some ****** things...
REPORT N3 (added on September, 14, 2006)
Benjamin (France)
Here's a really interesting story: I was scammed by this same girl Natasha Ryasichenko who has scammed and tried to scam several other men as well. She's really a ruthless scammer and I advice everyone to be extra careful when dealing with her! She lies and tells all kind of crazy stories! I've been looking at many scam sites and she's really a well known scammer and there's many victims. This girl has to be stopped,she should be behind bars!!!One story I read wwas that she had lied to some guy that her friend was shoot and needed and urgent surgery, to some guys she told about her dying father needing a surgery and in one story there was some ***** photos and guess what; she's trying to blaime me too for something like that, I mean like that I'm obsessed of getting her ***** photos!Hey,come on, she's not that pretty!
Well, anyway, I could tell that she was not a serious girl even though she says she is and telling the same old story that she's not a **********... Well, prostitues don't ask for money and try to sell their ***** photos in return!

I so pleased that has got your letter.
It is so many things that I want to tell you, I think I start with history of my life:I was born at 8of february in Kherson,south of Ukraine. Ukrainian people are very good. But our country is poor and corruption. I have mother and father I love them very very much. It is the best people for me in the world.
I work as a fashion model. But it is very hard. And here for this is pay not too much. But my friends think that I have all ability to be a good model. I think I must have time to myself and for my future family but this work take all my free time.
My friends tell me that I beautiful but I do not know, I not always complacent of as I look.
I like reading books about love. I like forest, mountains, seaside. I want to walk with my lovely man by the forest. I want to see sunrising on seaside with my love. I want to wake up in your arms. I want that we will be two part of one. I see v you are good man. I like you very much. I want to know more about you v for me inside world of man is more important that how he is looks. I believe that you will love me as much as I will love you. I understand that you want to know more about me. But I know English bad. It is very hard for me to write. It is much for one letter for me I of course will write more about me in next letter. I use translation program and program that show me my mistakes.
Now I searching for English teacher but that I found it is cost too
Read more