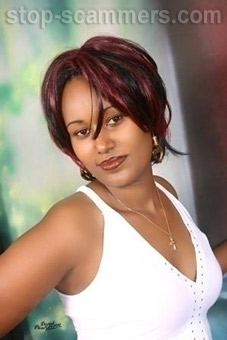 REPORT N1 (added on April, 1, 2010)
Max (UK)
This scammer contacted me on chatterbox UK. After doing some research, this scammer advertises on various websites.
These are the inconsistencies: On the scammer's UK Chatterbox profile; it states the scammer is from Liverpool, England in the United Kingdom aged 23. In the email sent to me, the scammer claims to be from Sudan and currently living in Senegal aged 24.
As a fellow internet user, I feel I have the duty to report a potential scammer.
REPORT N2 (added on August, 9, 2010)
Bertrand (Belgium)
This is a part of het fake story.
REPORT N3 (added on January, 12, 2011)
Lesiba (South Africa)
Send me an e-mail saying she's from rwanda but staying in the refuge camp in senegal. Telling me about the pastor and her late father's money. And on the web she said she's blessing41 from usa.
REPORT N4 (added on July, 22, 2013)
Dileep (India)
Well
she wrote me only three letters.
But in the second one itself she opens up.
REPORT N5 (added on March, 16, 2015)
Khalil (Pakistan)
Same old story.

Emails from Pascaline Morrison to Max (UK)
This is my e-mail(pascalinone@yahoo.co.uk
How is your day...
My name is pascalin.i am a beautiful young girl with full of love.
please i will like you contact me through my e-mail(pascalinone@yahoo.co.uk)
At the same time i will show you my picture.
and enjoy your self.kisesssssssssss
Yours lovely Pascalin

My name is Pascalin Morrison i am (24yrs) but age doesn't matter in a real relationship,I am from Sudan in Africa,5.7 ft tall, fair in complexion, single,(never married ) and presently i am residing here in Dakar as a result of the crises in my country.

My late father Dr Lormah .D. Morrison was the managing director of Morrison COCOA INDUSTRIES (Ltd) in Mogran City, Khartoum (the capital city of Sudan in my country) before the rebels attacked our house one early morning and killed my mother and my father in cold blood along with my only brother Mike.

It was only me that is alive now and I managed to make my way to a near by country SENEGAL where i am leaving now as a refugee under a Reverend father's care and i am using his computer to send these message to you.

I would like to know more about you and your country,Your likes and dislikes,your hobbies and what you are
Read more

Emails from Pascaline Morrison to Bertrand (Belgium)
Dearest,one
How are you today, along with your business and your family?. I guess all is well with you.I know this mail will come to you as a surprise since they have not had a previous correspondence, please bear with me.I am more than happy to read your mail interesting site and I hope they are fine and healthy, I noticed that you're the kind of man I am looking for since all this i good, I think you are a trustworthy and caring person, that's what makes me to reveal my identity to you .
My name is Miss confidence
David, 23 years after the Darfur region of Sudan and presently i am residing in the refugee camp here in Dakar Senegal as a result of the ****** of my family by the rebels last year please do not be discouraged for hearing this.I believe deep inside me that will never break my heart or let me down in any case.
I am from the family of the late Phillip Engr.David. Phillip Engr.David My late father was the Chairman, Gruv-Melton Oil and Gas Company a private extracting oil in Darfur. The brutal ****** of my mother and my father, my sister and brother killie killie took place early one morning by the rebels as a result of civil war is going so far Sudan.I was in my second year in Applied Mathematics University Department of Darfur in Sudan before the death of my beloved Parents.I contact you for possible assistance. My stepmother was a very bad and that the intention to **** me and my father and my real biological mother is dead.
Then
Read more

I am more than happy in your reply to my mail, How are you today ? and How was your night? hope fine. Mine is a little bit hot over here in Dakar Senegal. this camp we are only allowed to go out from the camp only on Mondays and Fridays of the weeks.Its just like one staying in the prison and i hope by God's grace i will come out here soon,

My name is Blessing Dunga I am from Rwanda in Central Africa, i am 24yrs old, 5.3ft tall, fair in complexion,(never married before )and presently i am residing in the refugee camp here in Dakar as a result of the civil war that was fought in my country.My late father Dr Dunga he was the personal adviser to the former head of state before the rebels attacked our house one early morning and killed my mother and my father in cold .it was only me that is alive now and I managed to make my way to a near by country Senegal where i am leaving now In this amp we are only allowed to go out only on Mondays and Fridays of

I don't have any relatives now whom i can go to all my relatives ran away in during the crises in my country, the only person i have now is (Rev.JOHN) who is the pastor of our Church here in the camp he has been very nice to me since i came here but i am not living with him rather i am leaving in the women's hostel because the camp have two hostels, one for men the other for women.

My name is Grace Garang, 23 years old but age doesn't matter in a real relationship,so i am comfortable with your age,My hobbies are Reading,traveling Listening to good jokes also my likes are obedient,Honest,sincerity,truth and my dislikes are lie,dishonest,envy,and betrayal.

I am from Southern Region of Sudan,5.7ft tall,fair in complexion single,(never married ) and presently, i am residing here in Dakar as a result of the civil war that was fought in my country some years ago. My late father Dr John Garang was the greatest Sudanese politician in history. A Christian and a southern Sudanese from the Dinka tribe, and also the First vice president of Southern Sudan in Northeastern Africa in July 9, 2005. He was involved in the Helicopter Crash on July 30 2005 that resulted his Death due to the pilot error and My late Mother died in the civil war. During the death of m father, there is civil war going on radically that resulted my relocating to save my soul with the help of red Cross

Emails from Pascaline Morrison to Khalil (Pakistan)
Dearest one,
How are you today?alongside with your family?am very happy for your response to the mail i sent to you,Dearest please i know that this message might come to you as a surprise, but i want you to understand my reasons of writing you,
my name is Loveline Jones, am 25(years old single,am a very peaceful lady looking towards to meet an inspiring person(am a Sudanese, and my biological mother was Evelyn Jones,who was a missionary in the southern Sudan, and later she became a successful couple alongside with my dad who was Dr Engr.paul.David, the Chairman of Grus-Melton Oil and Gas Company (a private extracting oil in Darfur Sudan),and also a secretary to the(F.I.P.G.S) foreign investors on petroleum and gas sector in southern Darfur Sudan
And later he became a victim during the political/regional crisis in my country(Darfur Sudan)that leads to his assassination alongside with my beloved mother,and after the death of my parents,my wicked stepmother who was also a Sudanese came back from abroad only to claim all the funds and properties of my late parents which some part of it was deposited on my half as the next of kin, she maltreated me and made several plot to **** me,so i became afraid, and i took away all the important document of my late fathers funds and properties concerning my own part of inheritance and escape my dear life to a near by country (Dakar Senegal,)
where am living as a refugee under the care of a church ministry in
Read more